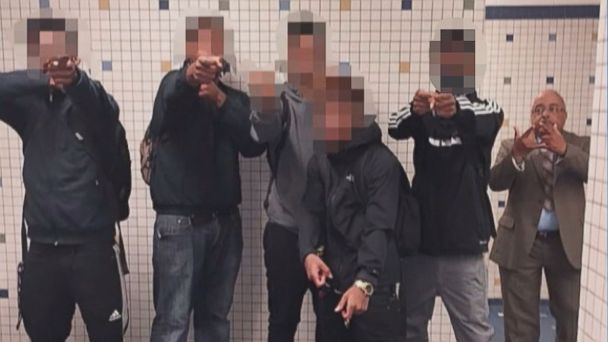 A Virginia high school is batting down accusations that its principal is flashing gang signs in a recent photo with students.

The photo shows Brunswick High School principal Warren Bell making hand gestures, next to five students, all of whom are also gesturing with their hands.

Bell wasn't making any inappropriate signs, and was actually trying to get the students, who were making a commotion in the restroom by taking the photos, to stop, Superintendent Dora Wynn said in a statement to ABC News.

The photo has been circulating online, the school said. It's unclear where it came from.

"I am really appalled," Shirley Penn, whose daughter attends the school, told the station. "Seeing is believing. He is in the picture and from what I can make out, he's making signs."

"We ain't no gang," he told the station. "We were just posing for the picture. It surprised me how much people saw it, how people took it, much views it got and stuff, how many people took it the wrong way."