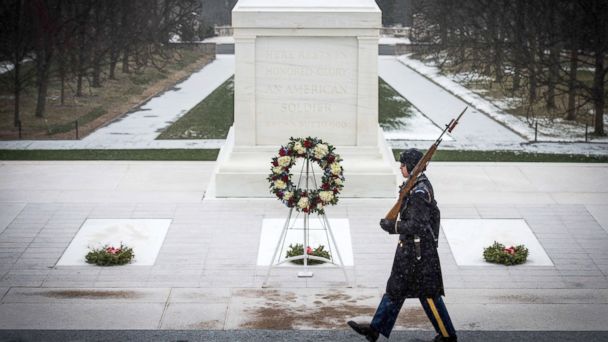 The snowstorm bearing down on the nation's capital is not stopping the small group of soldiers who continually stand guard at the Tomb of the Unknowns at Arlington National Cemetery. Much as they did during Superstorm Sandy in 2012, Tomb Sentinels will brave the elements to continue guarding the hallowed memorial.

Since April 6, 1948, Tomb Sentinels from the Army's 3rd Infantry Regiment's "The Old Guard" have guarded the Tomb for 24 hours a day, 365 days a year regardless of the weather.

"These guys will be out in the snow, no matter what," said Major Russell Fox, a spokesman for the Army's Old Guard. "They love what they're doing and they're dedicated."

And while the rest of Washington may be dreading the storm, Fox said "a lot of the guys are looking forward to this and kind of excited about it."

A "relief" typically consists of six Tomb Sentinels who serve a 24-hour shift guarding the Tombs. They turn over watch of the tombs to another relief every morning at 6 a.m.

Arlington National Cemetery closed its doors at noon today and will be closed through the weekend, but plans call for the planned turnover of reliefs to take place Saturday and Sunday mornings.

The Tomb Sentinels are a familiar sight to most tourists who visit Arlington National Cemetery. Dressed in their dress blue uniforms, they "walk the mat" on the plaza in front of the white marble sarcophagus that lies above the remains of an unknown soldier from World War I. Unknown soldiers from World War II and the Korean War are buried in crypts in front of the sarcophagus.

The sentinels march in front of the tombs for 21 paces, then face north to stand at attention for 21 seconds before marching 21 paces in the other direction.

It is standard when the cemetery is closed for the members of the relief change out of their formal uniforms into camouflaged uniforms.

During inclement weather and nighttime hours, the tomb's sentinels can stand watch over the tomb in a small enclosure made of green cloth with an awning known as "the box," which is located 20 feet from the tomb plaza. Sentinels can remain inside the box for 2-hour intervals with their M-14 rifles by their side, though they are not required to be at attention.

During Hurricane Sandy, one soldier volunteered to stand watch over the tomb for an unprecedented 23 hours straight, during which he sometimes walked the mat.

For the snowstorm, Fox said the sentinels will be continually shoveling snow from the plaza so that it does not accumulate and impedes their duty.