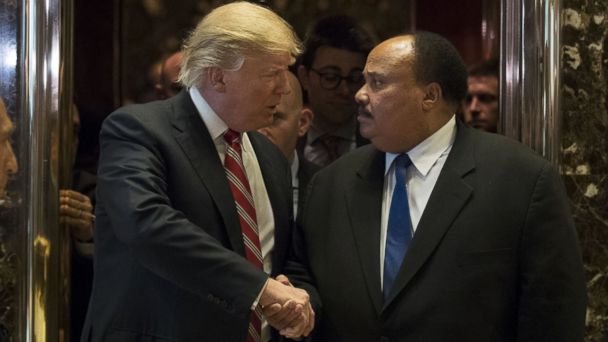 Martin Luther King III said that he had "a very constructive meeting" with the president-elect and touched on how he hopes to be a "bridge-builder" to help the country "become a greater nation" moving forward.

He praised the work of Rep. John Lewis, the Georgia congressman and icon who marched with Martin Luther King Jr. at Selma and other key civil rights protests.

Martin Luther King III did not criticize Trump directly, saying that in the "heat of emotion, a lot of things get said on both sides."

"The goal is to bring America together," King said in the lobby of Trump Tower this afternoon.

Senior transition sources initially said Trump would visit the National Museum of African American History and Culture in Washington, D.C. But, ABC News later learned that the visit was removed from his calendar due to scheduling issues and had not been fully planned. Spicer said this morning that the president-elect was never planning to go to the museum today.

"He was never going to Washington," Spicer asserted on Fox News. "I think what he was trying to do was find an appropriate way to celebrate and observe Martin Luther King's birthday. He is going to meet with a group of individuals today, including Martin Luther King III to talk about that legacy and celebrate the birthday of Dr. King."

Trump tweeted Monday morning that we should honor Martin Luther King for being "the great man that he was!"

"Celebrate Martin Luther King Day and all of the many wonderful things that he stood for," Trump said on Twitter. "Honor him for being the great man that he was!"

The meeting comes after the president-elect was criticized over the weekend for sparring with Congressman and civil rights icon John Lewis.