Trump On GOP Primary: 'This Is Not Democracy' 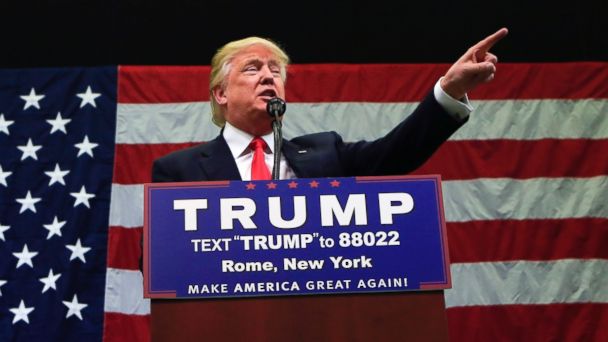 Republican presidential candidate Donald Trump ratcheted up his criticism of the Republican Party and its process for selecting delegates for the GOP nomination, calling it "not democracy at its finest."

In an interview on Tuesday, ABC News' Jonathan Karl asked Trump whether he and his campaign were ready for the delegate-by-delegate fight that is dominating the primary.

Trump emphasized that he is still ahead of rivals Ted Cruz and John Kasich (whom he called "two leftovers") in the delegates race.

"I think we're doing very well but despite that, it's a rigged system it's a very unfair system and it's not democracy," he added.

At his campaign event in Rome, New York, Trump said the RNC should be "ashamed of themselves for allowing this kind of crap to happen."

"The Republicans have a worse system than the Democrats, but they have superdelegates," Trump said at the event. "It makes it impossible for a guy that wins to win," Trump said, referring to Bernie Sanders' battle against Hillary Clinton for the Democratic nomination.

RNC Chairman Reince Priebus tweeted Monday that these rules were set last year and there's nothing "mysterious" about them:

Trump refuted Priebus' tweet, telling Karl: "It's totally mysterious. In fact the people that are running it don't even know about it."

Trump was also asked if he would consider former presidential candidates, Marco Rubio and Scott Walker as running mates.

Trump did not dismiss the idea, and quipped: "I beat them and it was rough."

"I like Scott Walker, I always liked him but I beat him. Marco, I've always like him."

The real estate mogul also commented on his past friendship with Hillary and Bill Clinton, telling Karl, "When I was a businessman, I got along with everybody."

He added, "After this is all over with, I will get along with everybody as a politician -- as a president perhaps -- I will unify the party."

Trump has been campaigning across his home state for the last several days, focusing on Upstate New York, and heads up Pennsylvania on Wednesday.