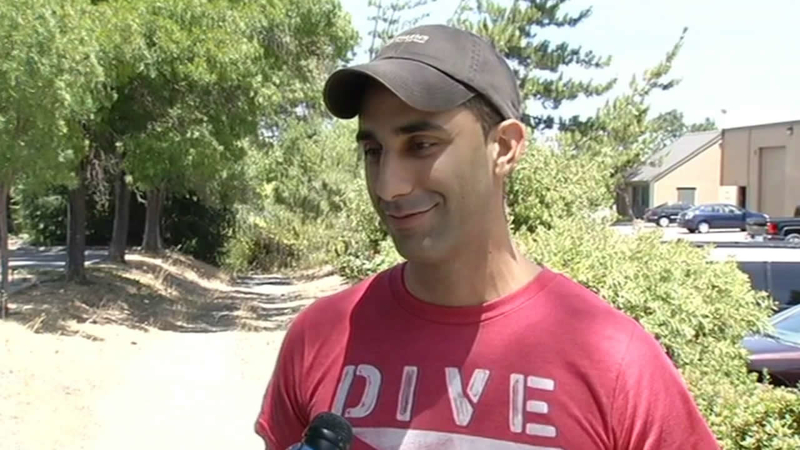 WALNUT CREEK, Calif. (KGO) -- A man is being called a hero for jumping into a situation that many others would've avoided altogether. When Ahmad Jodeh heard noises coming from a neighbor's apartment, he sprung into action.

Jodeh wrestled a suspected burglar to the ground at the Boulders Apartments on North Civic Drive in Walnut Creek and held him until police arrived.

Jodeh told ABC7 News he never had a second thought when he realized a burglar was breaking into his neighbor's apartment Monday night and says despite a stab wound to his legs, he has no regrets about stepping in to help.

"Looked through the peephole and there's a guy smashing through the door. I chased after him and I caught him probably about two thirds of the way down the stairs. And we kind of wrestled around on the ground," he said.

James Murdaugh, 51, is the man Jodeh wrestled to the ground. The suspect is a paroled burglar who investigators say pried his way past the front door of Jodeh's neighbor.

"He caught up with him partway down the stairway. They tumbled down to the bottom of the stairs. The suspect produced some sort of stun gun and said he was going to tase the person who was detaining him," Sgt. Mike McLaughlin said.

"He tried to tase me and I got the Taser away from him and then he stabbed me with his screwdriver that he was using to pry open the door, like a 12-inch big screwdriver," Jodeh said.

Jodeh's actions are even more remarkable given he's still recovering from a serious skydiving accident last fall that left him with a shattered pelvis and right leg, which is the same leg that was stabbed.

While repairman replaced his neighbor's battered door on Tuesday, Jodeh was left to ponder whether his effort was worth it.