What's in Republicans' tax plan and what it means for you 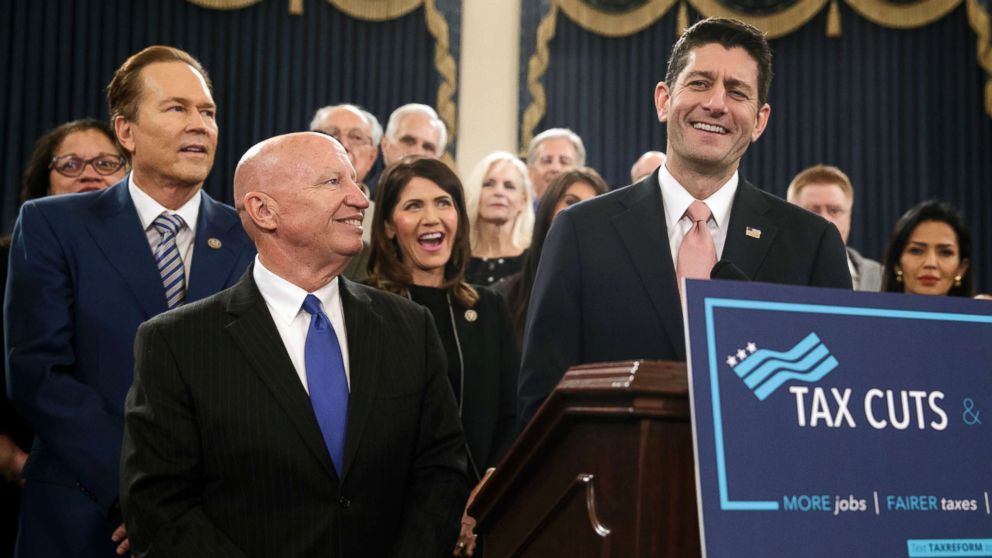 ABCNews
By MARY BRUCE
Republicans in the House of Representatives released an ambitious and long-awaited tax bill Thursday that seeks to simplify the tax code and reduce corporate rates, the latest step as the party works toward passing a major item on its agenda.

The Tax Cuts and Jobs Act would reduce the number of tax brackets from seven to four, maintaining the top marginal rate at 39.6 percent, and almost double the standard deduction, the amount that can be removed from one's income before taxes. Under the bill, the country's corporate tax rate would be permanently reduced from 35 percent to 20 percent.

The bill was originally scheduled to be released Wednesday but was pushed back a day as Republicans fine-tuned the text. GOP members of the Ways and Means Committee, which is primarily responsible for tax writing, worked into the evening Tuesday and throughout the day Wednesday to address some of the sticking points dividing party members, including state and local tax (SALT) deductions.

Changes to state and local property and income tax deductions

After early proposals called for a wholesale elimination of deductions for amounts paid in some state and local taxes, it was partially maintained in the final bill. Taxpayers would continue to deduct property taxes under the bill - though the amount is capped at $10,000 - while income tax deductions would be eliminated.

On 401(k)s, the text released Thursday appears to maintain the current maximum that individuals may contribute on a tax-free basis at $18,000, following through on a pledge made by President Donald Trump that the plans would not be affected.

"There will be NO change to your 401(k)," Trump tweeted less than two weeks ago. "This has always been a great and popular middle class tax break that works, and it stays!"

Other proposed changes include lowering the cap on the mortgage-interest deduction, which subtracts from taxable income the interest payments that taxpayers make toward mortgages. The Tax Cuts and Jobs Act would halt the deductions at interest paid on the first $500,000 in loans; the current cap is $1 million. Critics believe the move would disproportionately affect residents of areas with high home ownership costs.

The plan would further institute a new, one-time tax on overseas profits set at 12 percent for cash holdings and 5 percent for illiquid holdings, a provision seemingly intended to force companies to repatriate overseas profits. Some large corporations have said they would be inclined to bring cash back to the U.S., if possible.

Ways and Means Committee Chairman Kevin Brady, R-Texas, said the plan - which he labeled a "complete redesign of the code" - adheres to budget rules requiring the measure to add no more than $1.5 trillion to the federal deficit over 10 years. He expressed his excitement at a press conference unveiling the plan Thursday.

"Real relief from today's complex, costly and unfair tax code is on the way. With this bill, there's relief for real American families," he said. "There's relief for American workers, and there's tax relief for hard-working job creators of all sizes."

He added that the legislation has Trump's "full support."

The White House released a statement shortly after that, in which Trump applauded the release of the bill, calling it "another important step toward providing massive tax relief for the American people."

"We are just getting started, and there is much work left to do," the statement continued.

Speaking from the Oval Office later in the day, Trump expressed his belief that Republicans would be able to pass the legislation by the end of the year.

"I really believe we'll have it done before Christmas. I consider that to be one of the great Christmas presents," Trump said.

Speaker of the House Paul Ryan of Wisconsin said that the bill would save "the typical family of four" $1,182 per year in taxes. In recent weeks, some White House officials promoted a potential $4,000 in savings for the average family, through criteria set forth by the administration. He further pointed to reduction of loopholes and simplification of the code as added benefits.

"We're making things so simple, you can do your taxes on the form the size of a postcard," he said, holding a sample card.

Democrats slammed the bill Thursday afternoon, portraying it as a scheme against the American public that will ransack many of the middle-class benefits that millions depend on.

"In short, the bill's like a fish: If it stays out in the sunlight too long, it stinks," Senate Minority Leader Chuck Schumer, D-N.Y., said at a press conference.

Schumer vowed to fight the bill "tooth and nail" to prevent it from reaching Trump's desk and expressed optimism about his party's planned efforts.

"I believe we will prevail," he said.