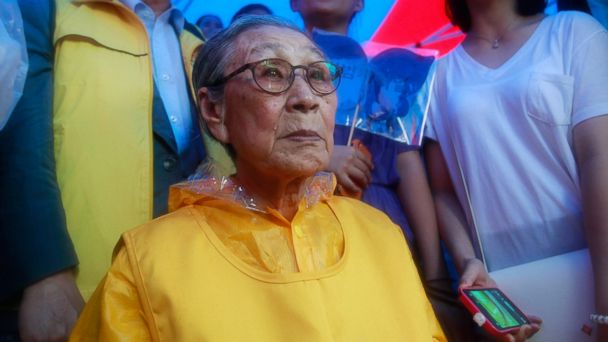 SEOUL, South Korea -- Bok-dong Kim is 89, but she is still haunted by her years as a teenager when Japanese soldiers during World War II turned her into a "comfort woman," or sex slave.

Kim is one of only 55 Korean comfort women still alive and she hopes that talks this week in Tokyo will finally result in what she and the other women have been seeking for decades - an apology and compensation.

Kim told ABC News that the trauma haunts her every day. "It pains me to the bone," she said. "We were never set free. Even after the war was over, the memories enslave us."

During the war some 200,000 women from Korea and China are estimated to have been forced into sexual slavery by Japanese soldiers. The issue of the comfort women has long been a source of diplomatic tension between Korea and Japan. This week's negotiations follows the first round of talks held in April when Seoul and Tokyo agreed to hold regular director-level talks on the issue.

The South Korean government has stated that Japan needs to resolve the comfort women issue in an "effective way that is agreeable to the victims." The government is calling for a sincere apology and compensation. Japan, however, remains firm that all issues were settled in a 1965 treaty that normalized bilateral ties between South Korea and Japan.

For Kim, who was just 14 when she was taken by Japanese troops to serve as a comfort woman, such diplomatic language misses the point.

"The Japanese government needs to take responsibility for the crimes that were committed during the war," she says. "Japan continues to deny the blatant truth. But we want the Japanese to acknowledge the wrongs of their past and give us a sincere apology and compensation. It should not take this long," she said.

"Unspeakable atrocities were committed," she told ABC News. "Young girls and women were taken, and we became slaves. I was dragged around by Japanese soldiers. Once the war was over, I was thrown away. They took my name, they took my youth and they took my life."

An apology of the Japanese government would mean a lot to Kim. Specifically, it would mean "Peace. We just want peace."