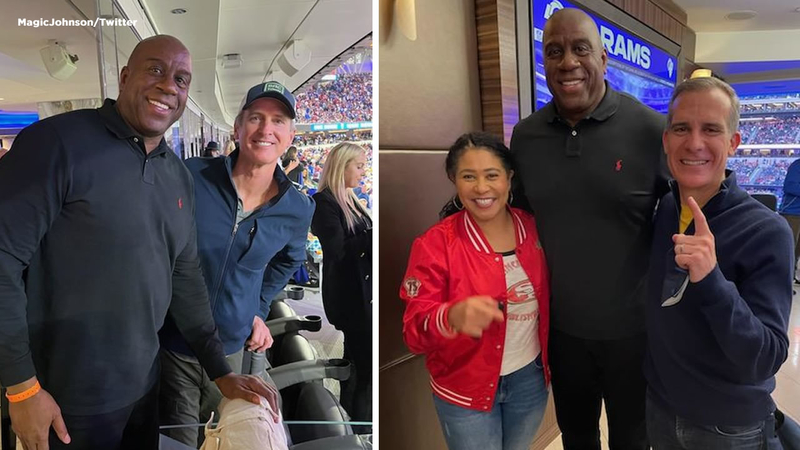 Magic Johnson posted pictures on Twitter with the governor and mayors at SoFi Stadium during Sunday's NFC title game between the Rams and the San Francisco 49ers.

None of them are wearing masks for the photo, although Garcetti appears to be holding a mask in his hand.

"Toddlers are being forced to wear masks all day long in school. Maybe one day they'll be governor or the mayor of L.A. and they won't have to follow the rules they impose on others."

Toddlers are being forced to wear masks all day long in school. Maybe one day they’ll be governor or the mayor of LA and they won’t have the follow the rules they impose on others. pic.twitter.com/YGJDZeBxGA

Both Newsom and Garcetti said on Monday that they were wearing masks throughout the game, but only removed them to pose for the pictures.

"You'll see the photo I did take. Magic was kind enough, generous enough to ask me for a photograph. In my left hand is a mask and I took the photo. The rest of the time I wore it, as we all should. Not when I had a glass of water. And I encourage everyone else to do so."

A Garcetti spokesman said: "He was wearing a mask at the game and removed it for a brief moment to take a few photos."

CA GOP Chairwoman Jessica Millan Patterson also commented on the controversial photos. "Credit to Magic Johnson for his assist in exposing California Democrats' shameless hypocrisy on masks. While they force California children to wear masks in school, Gavin Newsom and friends get to enjoy a mask-free night of football in a packed stadium. His blatant and insulting disregard for his own covid rules is a crystal-clear sign that it's time for his draconian policies and state of emergency to go. Californians deserve so much better than these hypocritical, reckless California Democrats."