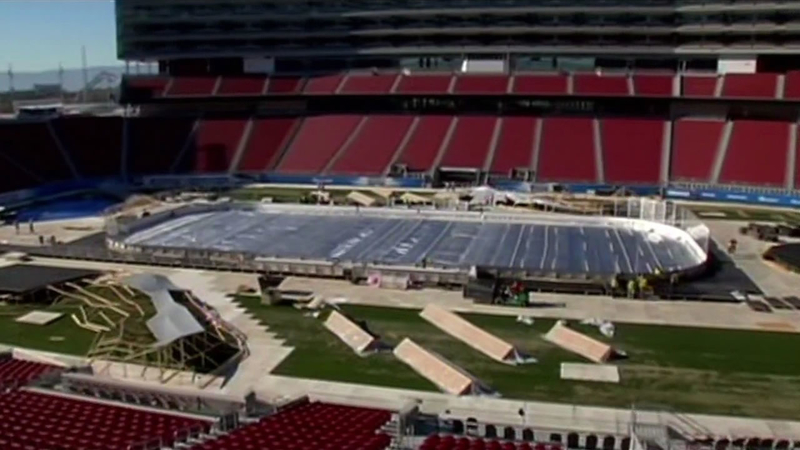 SANTA CLARA, Calif. (KGO) -- Crews are working to install a 200-foot by 85-foot patch of ice at Levi's Stadium ahead of Saturday night's hockey game between the San Jose Sharks and Los Angeles Kings.

About 200 workers are at the stadium building everything they need for the game.

Ice and the record-breaking temperatures we've seen recently don't really mix, but in Santa Clara the National Hockey League is finding a way to make it work at Levi's Stadium.

An outdoor hockey rink is in place for the stadium series game between the Sharks and the Kings.

At least 3,000 gallons of coolant is piped under the ice and reflective blankets have been put on top to keep the ice from melting under the sun.

"Probably half way through the ice making process. We have about an inch down an inch more to go, two inches total. We'll put ice markings in the logos and the other ice markings in tomorrow, so it's coming along quite well," NHL spokesperson Jamey Horan said.

Staging is being put up for the entertainers who will perform during the first and second intermissions. And surrounding the rink, there are some decorations showing the northern California landscape.

"And it's really just a celebration of hockey, so people are going to, if they like hockey inside they're going to love it even more outside," Horan said.

About 70,000 people are expected to attend Saturday night's game. Officials have even added auxiliary seating because this game is so popular.