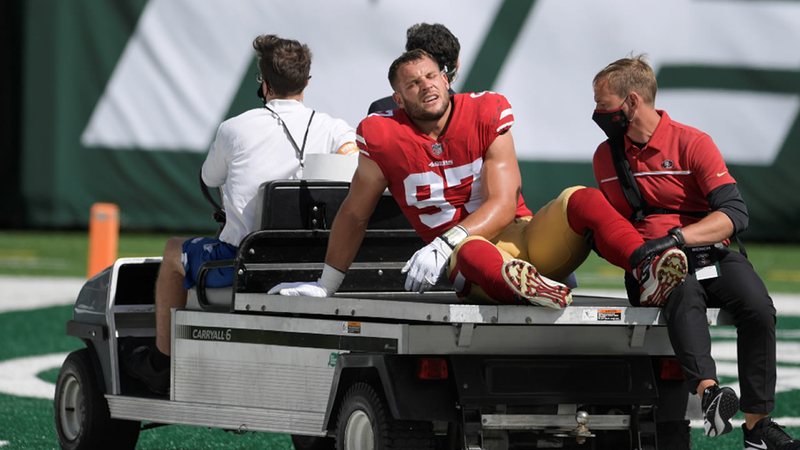 The 49ers had to wait a few extra hours to confirm that 2019 Defensive Rookie of the Year Nick Bosa had a season-ending torn ACL and were still waiting to hear about the status of fellow starting defensive lineman Solomon Thomas. An MRI truck expected to meet them at their hotel in West Virginia broke down, leading to the delay.

The broken-down truck, however, is the least of coach Kyle Shanahan's concerns.

Along with the injuries to two starting defensive linemen, the Niners are also dealing with a high ankle sprain to quarterback Jimmy Garoppolo that likely will sideline him this week, a sprained MCL that has shut down running back Raheem Mostert and injuries to running back Tevin Coleman (knee), defensive tackle D.J. Jones (ankle) and linebacker Dre Greenlaw (thigh) that all came during a 31-13 win against the New York Jets on Sunday.

Shanahan said there was a lot of frustration when the team arrived for its stay at The Greenbrier resort before visiting the Giants next week.

"You do that pretty much every Sunday night," he said. "Usually you do it after losses, but this was one that felt really good about the win but we had some time to (complain) a little bit about some of our unluckiness with injuries, especially taking the plane ride together and being here last night at the hotel together. It's also a good challenge, too."

The rough day at the Meadowlands followed a bad start to the 10-day East Coast trip when the team had to switch airports because its charter plane had been hit on the runway, leading to a 6-hour delay.

It's been that type of season for the 49ers, who already have played without All-Pro tight end George Kittle, star cornerback Richard Sherman, No. 1 receiver Deebo Samuel, edge rusher Dee Ford and starting center Weston Richburg.

The Niners hope this wave of injuries doesn't impact their season the way it did two years ago when a season-ending knee injury to Garoppolo led to a 4-12 campaign.

"We're a lot more equipped for this than we were a few years ago," Shanahan said. "We have a lot of other good guys, too. You can't replace some of those guys we lost, of course. But collectively, I know we've got a good team and it's not just me that feels that. I know our players know that. And I know a lot of guys are excited for opportunities."

The Niners were upset after the game because they felt the new turf at MetLife Stadium was especially sticky and might have contributed to the injuries.

They have to return to the same field next week to face the Giants and talked to the league about the situation. Shanahan said he hopes his players can get assurances of the safety of the field before returning.

"We have to come back here and play again on the same surface," defensive lineman Arik Armstead said. "That's anxiety-provoking to see that happen and know that you have to deal with it again."