"The mayor is a person of faith. We aren't calling her out into a policy but calling her into her moral values and to support the people who need the help in the communities."
KGO
By Amy Hollyfield 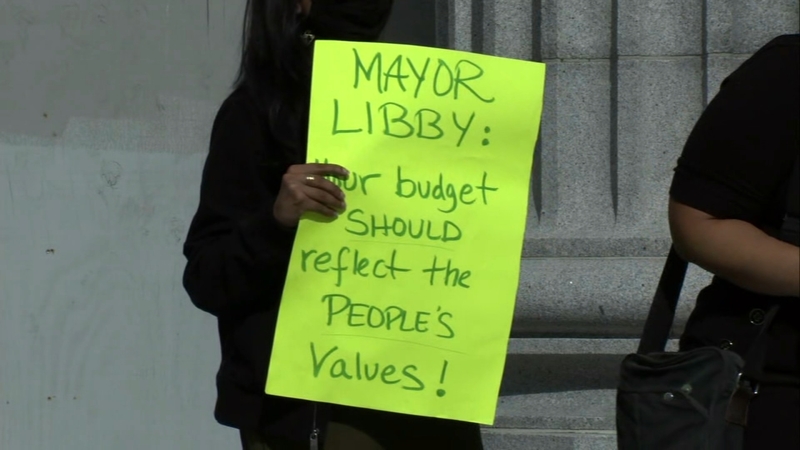 OAKLAND, Calif. (KGO) -- A group of faith leaders made their way to Oakland's City Hall Friday morning to get involved in the budget process. The group had a letter for Mayor Libby Schaaf, demanding that she reimagine the city budget.

But their action did not go quite as planned.

Because of the COVID-19 pandemic, the mayor was not working at city hall. The group was not allowed inside. So they posted their letter on the plywood boards covering city hall's front door, and made their plea on the steps.

"Listen to the voice of faith leaders!" said one activist into a microphone.

In an interview before the event started, Saabir Lockett explained that they consider the budget a moral document.

"We believe the budget is a blueprint of our values and any budget that is presented to the city council from the mayor should reflect the values of the people," Lockett said. He is the Director of Faith Alliance for a Moral Economy.

Members and leaders from 28 faith organizations in Oakland signed the letter, asking the mayor to propose a budget that looks different than traditional past budgets.

"We are demanding that the mayor prioritize and support strategies to refund local communities, restore dignity and reimagine public safety," said Minister Cherri Murphy into the microphone.

The group's four key demands are to focus more on essential workers, housing and immigrant support services. And to pull money from the Oakland police department and invest it in human needs such as healthcare and education.

"The mayor is a person of faith. We aren't calling her out into a policy but calling her into her moral values and to support the people who need the help in the communities," Lockett said.

He said they were disappointed they did not get to see the mayor in person. They now plan to email her the letter.

We reached out to the mayor's spokesperson, Justin Berton, for response. He sent us this statement:

"Community investment is at the heart of every city budget, and we appreciate this group of faith leaders coming together to share their priorities with the mayor and the City. The budget process is a community dialogue, and today's letter is an important part of the conversation."

A vote on the budget is expected at the end of June.