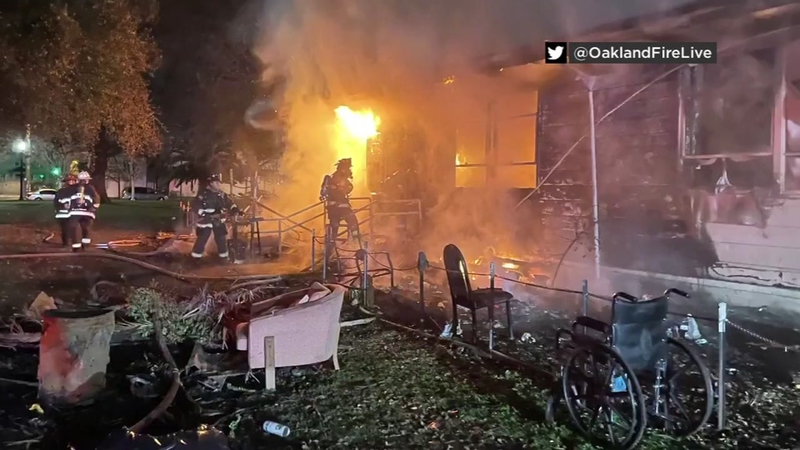 OAKLAND, Calif. -- A busy community center in Oakland's Eastlake neighborhood that serves thousands of meals every week to people in need was gutted by a fire early Saturday, fire officials said.

The blaze at the Vietnamese American Community Center of the East Bay was reported shortly after 1 a.m. and is believed to have sparked at a nearby homeless camp. The cause is still under investigation, fire officials said.

No injuries were reported in the fire and it's not clear whether any residents of the homeless camp were displaced, said Oakland fire spokesman Michael Hunt.

The fire was under control by 1:40 a.m. at the two-story building, located at 655 International Blvd. and adjacent to Clinton Park.

In Oakland's Chinatown, community leaders are going public with their pleas for help in combating an increase in violent crime, an effort deemed especially important with the Lunar New Year celebration kicking into high gear.

"This is obviously a huge loss for the community," Hunt said. "Thousands of residents rely on meals distributed by the center."

Jennifer Tran, the executive director of Oakland Vietnamese Chamber of Commerce, says about 30% of the building is damaged and she said though it may be ambitious, they plan to continue with their annual Lunar New Year Market Street Festival at Clinton Park on Sunday and will discuss future plans then.

"We were planning to come together at Clinton Park Sunday for Lunar New Year and will still come together for support, solidarity and safety for all our communities and in unity," she said Saturday in a Twitter post.

This is devastating for the Eastlake and Vietnamese community. We were planning to come together at Clinton Park Sunday for Lunar New Year and will still come together for support, solidarity and safety for all our communities and in unity. Thank you @OaklandFFs. https://t.co/05KlOau8dP