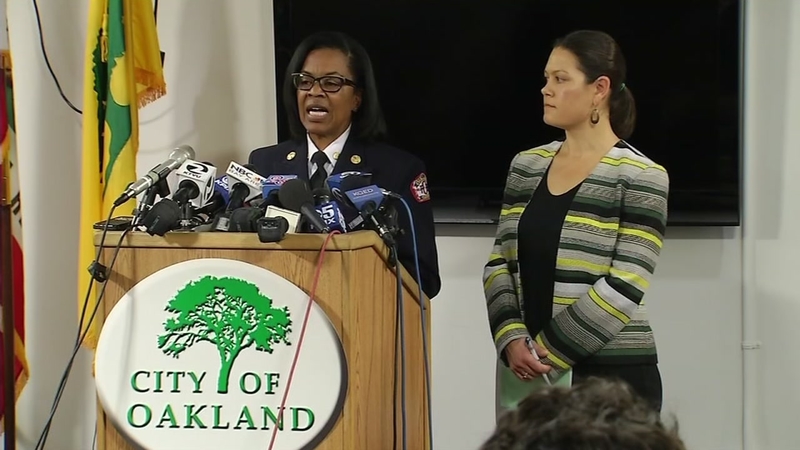 OAKLAND, Calif. (KGO) -- There's new information today on the potential cause of the Ghost Ship fire and what the Oakland Fire Department knew about the illegally converted warehouse, before the December 2 inferno that claimed 36 lives.

"To clear up the concern over the determination being electrical," said ATF Special Agent in Charge Jill Snyder.

Contrary to some reports, Snyder insists no specific cause for the Ghost Ship fire has been determined.

"The electrical system is part of the analysis the ATF and fire department investigators are looking at in determining the cause of the fire. The investigation is still ongoing though and at this time no final determination has been made as to the exact cause of the fire," said Snyder.

"We have no records of 1315 31st Avenue being inspected," said Oakland Fire Chief Teresa Deloach Reed.

In the meantime, Deloach Reed says there was no legal requirement for her department to inspect the Ghost Ship because it was not considered a residence or an active business.

"Nor do we have any records of them applying for a special permit, a change of occupancy. None of those areas that would trigger this facility to be in our system," said Deloach Reed.

Deloach Reed says not only were there no inspections, there were no service calls to 1315 31st Avenue, dating back at least 12 years. That's despite an arson fire outside the building on the lot next door in September of 2014.

"Right now, what I have is there was a fire at the vacant lot next door, whether individuals from that fire entered the building, I'm going to have to look further into that," said Deloach Reed.

A memorial filled with flowers and candles continues to grow at the site of the fire.

PHOTOS: 36 victims of Oakland warehouse fire identified
Remembering those lost in the Oakland Ghost Ship Fire
The massive Oakland Ghost Ship fire claimed the lives of 36 people in 2016 and now, nearly three years later, a verdict has been announced. Take a moment to remember the creative souls lost.
Click here to make a donation to help the families of the victims who died in this tragic fire.