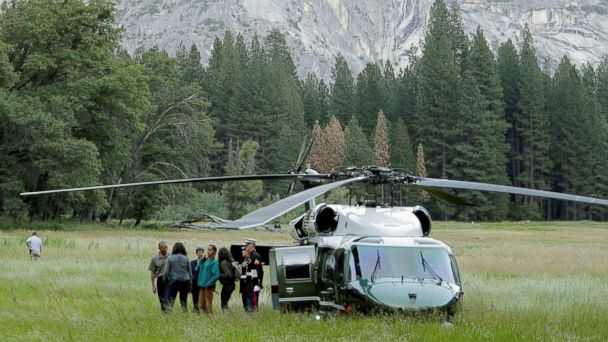 Obama says meadows are already drying out at Yosemite National Park in California, where he spoke Saturday after spending the night in the park with his wife, Michelle, and daughters Malia and Sasha.

He adds that a rabbit-like animal known as a pika is being forced further upslope in Yosemite to escape warming temperatures.

Obama and his family are spending the weekend at Yosemite after touring an underground cave Friday at Carlsbad Caverns National Park in New Mexico.

He wants more people to appreciate and visit America's national park as the system nears its 100th birthday in August.

The president's remarks highlighted the economic benefits of the 400-plus sites managed by the National Park Service.

Obama spoke on initiatives by his administration to protect the national park system. The White House said the Obama administration has protected more than 265 million acres of public lands and waters across the country, more than any other president in history.

"We've got many stories that remain untold about our history -- and I gave a few examples of national monuments and historic sites that President Obama has names, or have been named, by this administration," said Sally Jewell, U.S. Secretary Of Interior. "And we think those are important and the more we highlight them, the more the public will appreciate the full story of America."

The Secretary of the Interior went on to discuss the economic benefits our the national parks system. Here in California we have 27 national parks that have seen more than 38.4 million visitors -- boosting the local economy by $1.8 billion and supporting close to 26 thousand jobs.

Obama has used previous visits to parks to bring attention to climate change. He even appeared in a taping of an episode of Bear Grylls' reality show on a 2015 visit to the Alaskan wilderness.

He's hoping to lead by example - taking his wife, Michelle, and daughters Malia and Sasha, along to help celebrate the park service's centennial, which is in August.

This will be the 3rd time a president has landed at Castle Airport, but the first in decades. The last president to visit was Jimmy Carter in 1980 -- before that was John F. Kennedy in 1962.

The park service is alerting weekend visitors to expect roads to be more congested with the presidential visit. But you also have to keep in mind its Fathers Day weekend, so plenty of trips are already planned to the area.

Traffic will be backed up, and some areas in the Yosemite Valley will be closed. Typically traffic is already bad when visiting Yosemite.

"This planet belongs to all of us," says #PresidentObama, adding we can't just give lip-service to protecting it. #ClimateChange

#PresidentObama says every $1 spent at a national park is $10 for the local economy.

#PresidentObama asking all #Americans to visit a national park to experience beauty of America. #obamainyosemite https://t.co/SxLT1JVMiZ