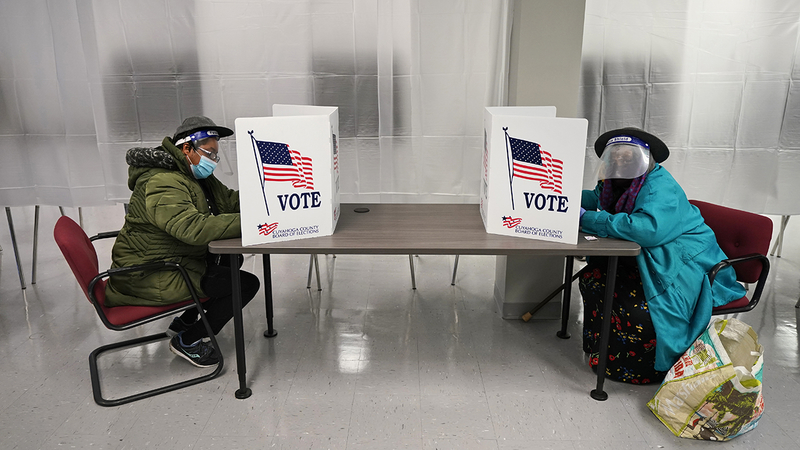 The country's seventh most populous state has three major cities, but its rural and suburban enclaves made Ohio a purple state on the political spectrum.

It flipped for President Donald Trump after backing Democrat Barack Obama in the previous two elections.

With 18 electoral votes, the perennial swing state appeared to be a toss-up in recent polling. Ohio's Republican Secretary of State Frank LaRose said recently that voting statewide was on a record pace.

One of the keys to watch across the state were two clusters of "pivot" counties -- four each in northeastern and northwestern Ohio -- that both Trump and Obama won on their way to the White House.

Wood County, for example, is mostly white, but its diversity in voting preferences can be traced to its varied economic base. Bowling Green State University and its college-educated workforce tends to push the county's voters to the left, but the blue-collar workers in agriculture and manufacturing -- the county's biggest overall employment sector -- pull it back to the right.

"This idea that election night is sort of this grand reality TV show where everybody gets to go to bed on election night knowing who won and who lost is just a flawed construct that's not the way it works," LaRose said during an interview Monday with podcast co-hosts ABC News Chief White House Correspondent Jonathan Karl and Political Director Rick Klein.

While Americans have become accustomed to knowing the winner on election night, LaRose said that this year in particular, due to the influx in absentee ballots, the ability to "make a pretty safe assumption about who's going to win or who's going to lose" may not be possible this year, not just in Ohio, but across the country.

He added, "The real deadline that we're focused on is getting that certification done of the final statewide results by the 28th of November, and then seating our electoral college on the 14th of December ... because that's that's the way the process plays out."

LaRose touted Ohio's system for processing absentee ballots ahead of the big day, noting that usually the 'very first' ballots counted after polls close are the absentee and in person early votes.

"Ohio has a really good system compared to other states. If you look at some of our neighboring states like Pennsylvania, Michigan, even up in Wisconsin, in those states and others they can't even begin processing absentee ballots, they can't cut the envelopes open until Election Day. In Ohio, we've already been doing that for four weeks," he said.

LaRose said that county election officials have been able to open returned mail ballots and check voters' registration and signatures, which also gives officials more time to contact voters and give them an opportunity to cure their ballots if there is an issue.

"On election night, the very first ballots counted in Ohio are almost always the absentee and early votes ... so right at 7:30 when the polls close, the boards of elections can begin the tabulation process," he said.


LaRose told podcast co-hosts Karl and Klein that when election results start coming at 8 p.m. or 8:15 p.m., it's largely going to be these votes, and then later in the night, more of the Election Day vote will come in.

Indirectly countering the president's oft-repeated talking points, LaRose said that while there were some issues with slow third-party vendors, which he said was "disappointing" and "shouldn't have happened," he's seen "nothing as far as fraudulent activity" with absentee ballots.

"As it relates to any kind of fraud related to absentee voting, that's exceedingly rare. It happens, you know, occasionally and when it does happen we take it seriously," the secretary said, noting that people have been referred for prosecution in the past.

Five-term Republican Rep. Steve Chabot of Ohio's 1st U.S. House District is in a competitive fight with Democrat Kate Schroeder for the seat there.

Chabot prevailed by about 4 points against a flawed challenger in 2018. But this time, it's Chabot who's being dogged by campaign finance issues that Democrats are attacking him on.

Trump won here by single digits, but Biden's competitiveness in the Buckeye State could help Democrat Kate Schroder -- who's out-raising Chabot and leaning into a health care message -- in this increasingly suburban district.

First elected in 1994, Chabot lost this district in 2008 only to win it back two years later in a better Republican year, so there's precedent for the national environment sweeping him out of office.