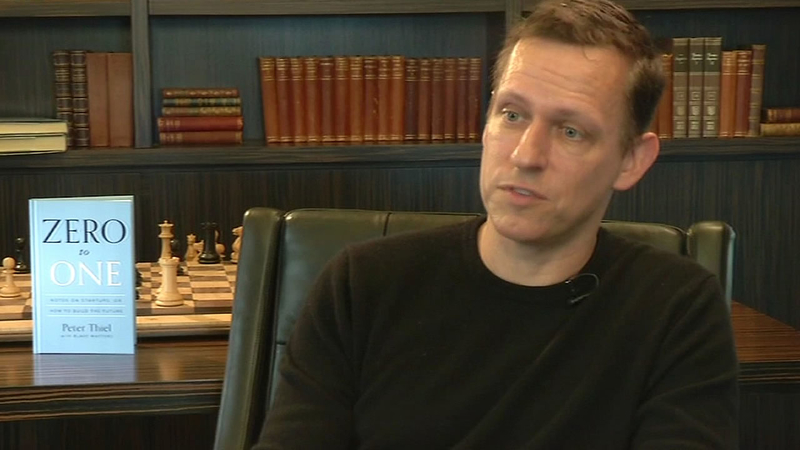 SAN FRANCISCO (KGO) -- Peter Thiel wants you to know who he is. You probably use some of the products he's helped create already. Now he wants to sell you his ideas about how to build a successful business.

Thiel is a rock star in the world of tech start-ups. At a recent conference for entrepreneurs in San Francisco, people hang on his every word.

He is the ultimate Silicon Valley success story after all, born in Germany, raised in Foster City. He graduated from San Mateo high school.

He was a co-founder of PayPal, selling the company in 2002 for $1.5 billion. That was just the beginning. Thiel was an early investor in Facebook and LinkedIn. He's re-shaping the music industry with Spotify and changing the way people travel with AirBnB.

We sat down with the 46-year-old billionaire for his only Bay Area interview. Thiel is promoting his new book, "Zero to One."

"It talks about how you go from zero to one. From nothing to something in creating a new business," said Thiel.

Asked what makes a company he succeed, he railed on Silicon Valley's culture of fun offices with a do anything attitude, adding, "I think that the best cultures are defined by a unique sense of mission, that your company is doing something that nobody else is doing."

He says that is where many companies in Silicon Valley have gone wrong. They come up with one good idea and stop innovating. Thiel is critical of Silicon Valley giants for not taking the lead.

He's called Google a monopoly because it is so big no one can compete with it and last week, he called Twitter "a horribly mismanaged company" because it has failed to do anything new beyond bringing us messages in 140 characters.

Thiel oversees his empire of investments from his office in the Presidio and dismisses critics who suggest Silicon Valley is on the verge of repeating the dot-com bust.

"People are always worried that it is another bubble like the late 90's. I don't think that is the case, I think this is the start of a very long boom," said Thiel.

Thiel is banking on that. He's teamed up with former PayPal partner and Tesla founder Elon Musk to create the first commercial space craft. Space-X expects to launch next year. Closer to Earth, he's working on an idea called Seasteading, building floating countries in international waters, to escape government regulation.

"There's often this idea that all the low hanging fruit has been picked, it is really hard to come up with new ideas, I am not saying it is easy, but I do think there are a lot great ideas out there," said Thiel.

Thiel's book is largely based on a class he teaches at Stanford University, his alma mater. But don't assume that part-time teaching job is an endorsement of higher education.

"College students are amassing too much debt and not getting too much for it. Student debt is up to a trillion dollars in the United States," said Thiel.

That's why Thiel is paying students $100,000 to drop out for two years and, instead, work with him to come up with new ideas for companies. He calls them his "20 Under 20."

"We've got about four years now of it now, so we've had 80 people who have gone through the program. It's been a fantastic experience, a number of great businesses have gotten started, people have learned a tremendous amount," said Thiel.

Some of those students have gone to college. Thiel does not call that a failure.

"I don't think there is a one set path for everybody," said Thiel. "Most of the people in the program have gone on to stay at startups, work at other businesses or another, a few have gone back to school, but I think that the key thing is that people learn a lot in those two years."

Thiel calls the program a success. It has launched 50 companies or non-profits, raising more $63 million in investments. Seven of those companies have sold, totaling more than $17 Million.

Thiel believes one of the "20 under 20" could hold the key to one of his dreams, finding a cure for getting old.

"The most common cause of death is old age in one form or another, and it's linked to every disease that we suffer from and I think it is something that is shockingly under explored, and under invested in," said Thiel.

Just one more extreme idea that makes Thiel is a visionary, inspiring entrepreneurs to take their own risks with the hope of a big reward.