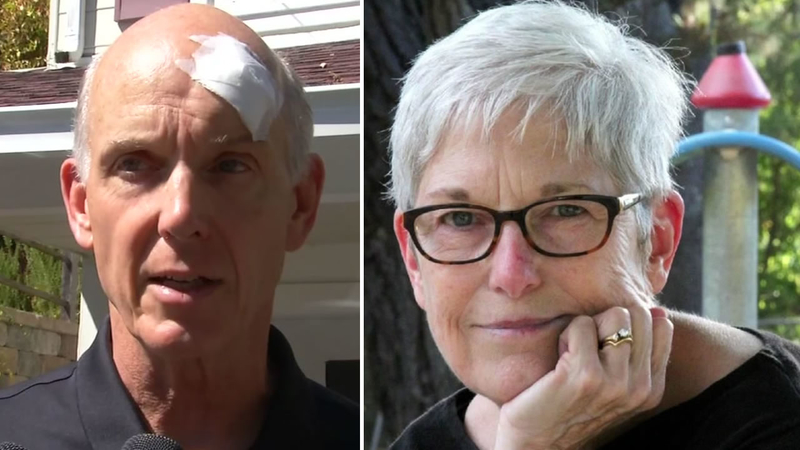 ORINDA, Calif. (KGO) -- Police say an Orinda couple was attacked and robbed in the driveway of their home by two men wearing Halloween masks. And despite a manhunt, the two suspects are still at large.

Carol Brown picked up her husband Tom Spalding from the nearby BART station just before 9 p.m. on Monday and went to the grocery store. Police say two masked men then followed home.

"We actually thought they were my son and his buddy doing a pre-Halloween prank on us, then I saw the guns," said Tom.

The shaken Orinda resident tells us he and his wife had just pulled into their driveway when two men wearing Halloween masks ran up to them.

"The guy said 'give it up,'" said Tom. "I reached in my pocket, pulled out my wallet, gave it to him. He hit me in the head with the gun. Meanwhile Carol still thought it was a joke and was fighting to keep her purse, which had her brand new phone in it and all her vacation photos on it. So the guy shot her twice."

A member of the Orinda school board, the 70-year-old was hit twice -- in the pelvis and upper arm.

"I just saw my dad run inside, bleeding, saying, 'They shot her, they shot her.'" said the couple's son, Micah Spalding.

Micah was inside the couple's home when his father came running in.

"I think my dad said one of them had a pig snout mask, like it was white with a pig snout on it," he said.

Police believe the two men followed to couple from either the BART station or the Safeway, just a few miles from their home.

"Whether you're in a parking lot at the BART station, or any shopping area, anyone can be a victim," said Orinda Chief of Police Mark Nagel. "It's important to always look around and see what's around you."