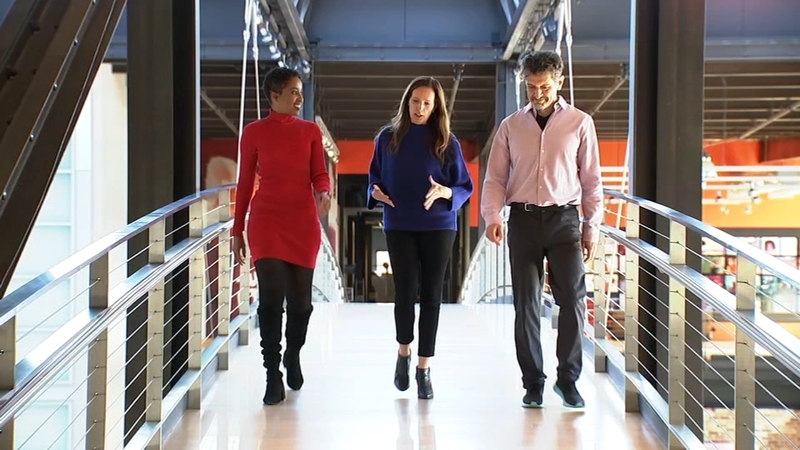 'Luca' from Bay Area-based Pixar heading to Oscars as nominees

EMERYVILLE, Calif. (KGO) -- "Luca" is one of five movies that could win the Oscar this year for best animated feature film. Developed at Pixar studios in Emeryville, the film's director Enrico Casarosa and producer Andrea Warren told me they're still trying to process it all.

"It really is a dream come true to be nominated for an Oscar," Warren says. "I mean, I'm a kid from South Dakota. I grew up watching the Oscars. It was kind of a thing me and my mom and sister always did. And even at the time, I didn't even really dare to dream that I would be a part of Hollywood. I felt so far away from that world. It just seemed impossible to be a part of it."

Enrico's been nominated for an Oscar before, for his short film La Luna. And still Casarosa says, "It doesn't feel completely real."

Luca tells the story of a young boy Luca and his best friend Alberto. Both are part human and part sea monster. And both are trying to keep that a secret during a summer on the Italian Riviera.

"Now this Seamonsterness it felt like the perfect prism and metaphor to represent anything we might be feeling different feeling ashamed or feeling that we're not really showing all of ourselves," Casarosa says. "And friendship is really what is friendship is like someone who's actually seeing for all of you."

It's a story inspired by Casarosa's life. He grew up and spent his summers on the Italian coast, with his best friend who really is named Alberto.

"I was certainly a little bit sheltered and a little bit shy when I was growing up," Casarosa recalls. "So I really met a real life troublemaker who got me out of my comfort zone."

In this special Oscar edition of On The Red Carpet, we take a look at the films up for Oscar gold, plus this year's best actor and actress nominees and our top 10 Oscar red carpet fashion moments!

We hope Alberto and Luca are still friends. We know Alberto and Enrico are. They recently took a trip to Italy together.

ABC7 News Anchor Kumasi Aaron asked Casarosa, "What did he think of the film and seeing your relationship portrayed that way?"

"He's very touched," Casarosa explained. "He described the scene after seeing the movie, where he started sobbing. Very, he was very, very touched and he got very, very emotional and his. His wife had to really kind of pat him on the shoulder to calm down.
Casarosa first pitched the idea for Luca 10 years ago in 2012. It's been a journey, one COVID-19 almost brought to a stop.

'It was something we never imagined being able to do.' Disney and Pixar's newest film, 'Luca,' completed from the home of the creators during the COVID-19 lockdown

"Many many different fields couldn't work the way they used to," Casarosa explained. "So you have to find a new way of recording actors. We get to do that from their closets, right? It's kind of some madness for sure."

"I read that somebody was doing something from the closet and you would have to tell them not to hit the hangers or something?" asked ABC7 News Anchor Kumasi Aaron.

Warren says the final project is a reflection of the entire team's experiences of friendship, otherness, and acceptance.

"What's amazing about the collaborative process of filmmaking here at Pixar is that everybody's bringing those insights, those memories, those stories, and it just makes it richer and deeper," Warren says. "And so as a crew, we connect and then we tried to put that in the film."

All those moments creating an unforgettable film, an Oscar nomination and hopefully an Oscar win.

"I feel like just being at the Oscar nominees lunch in the company of such great filmmakers and actors is truly such an honor and it would be amazing to win it," Warren says. "There's no doubt about it."