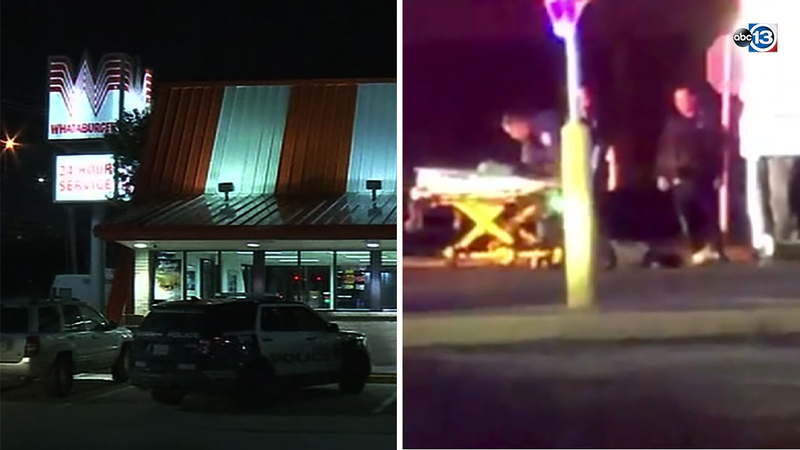 HOUSTON, Texas -- Police said a naked man was in "crisis" when he allegedly terrorized Whataburger employees in southwest Houston and later died after officers detained him.

The Thanksgiving night incident was reported around 7 p.m. at the restaurant located in the 9500 block of Bissonnet near the Southwest Freeway.

According to Houston police, a white man in his 40s entered the restaurant and began throwing garbage cans and chairs. The man also jumped up on the counter, scaring employees to the point that they called 911 and evacuated the restaurant.

The man, though, followed the workers and assaulted a female manager, police said. After he was pulled off by other employees, the man made his way to underneath a nearby overpass, where officers tried to detain the erratic person.

Ruben Cortade was on his way home from Thanksgiving dinner when he saw sirens and lights. He tells ABC13 he followed the squad cars and fire trucks to the Whataburger.

"They rolled him over to do CPR on him. I saw the firefighter doing CPR to the point where he put his hands up in the air, and they just loaded him onto the gurney and took him away," Cortade said.

Officers were able to get the man in handcuffs, but he then collapsed and was unresponsive. The man was taken to Memorial Hermann Southwest Hospital, where he was pronounced dead.

The employees were shaken up, but no one was seriously injured.

Police were looking into what may have caused the man's erratic behavior and his subsequent death.

HPD commanders, investigators & PIO en route to a scene at 9500 Bissonnet. Preliminary information is a male arrested for assaulting restaurant patrons stopped breathing & was transported to an area hospital where he was pronouced deceased. No other info at this time.