'Pretty low to steal from kids': $8,000 worth of P.E. equipment stolen from Milpitas middle school 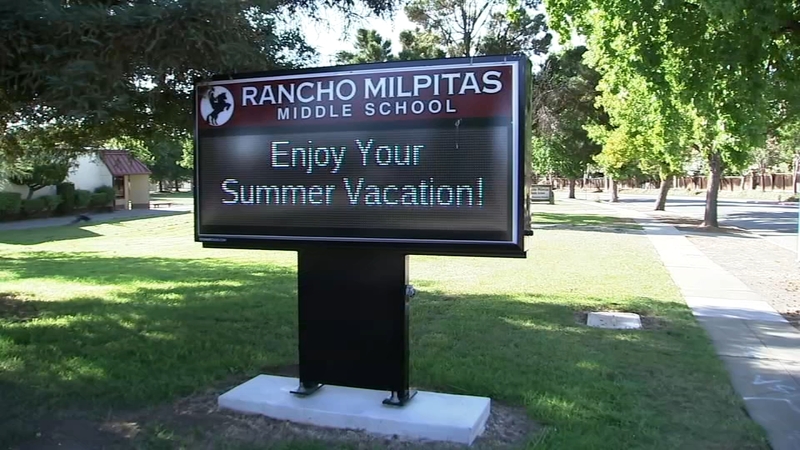 $8K worth of P.E. equipment stolen from Milpitas middle school

MILPITAS, Calif. (KGO) -- The race is on to replace $8,000 worth of P.E. equipment after thieves targeted Rancho Milpitas Middle School last week.

Principal Casey McMurray described the theft as disappointing and disheartening.

"It used to be packed," he said, opening the unmarked storage container where the equipment was kept. "There were bows, arrows, softballs. I mean, the whole thing. This is kind of bare bones."

The storage container is kept on-campus, though its contents would not be known to someone unfamiliar.

Among the items swiped by thieves, McMurray said the school is now without 21 softball gloves. He said the gloves were brand new, and never used. He said crooks also picked through quality archery equipment and left others behind.

"It had to be probably someone who knew what was in there and decided unfortunately, to do something that would have a negative impact in our P.E. program," he told ABC7 News.

McMurray said the P.E. program serves the 700 students of Rancho Milpitas, kids who will soon be returning to full-time, in-person classes for the first time since March 2020.

"They were gone for the last year and something," he said. "At home, doing Zoom P.E. Not the greatest environment for movement and that kind of learning. So, we were looking forward to them returning."

Returning, and getting students back to archery, softball and football. However, those lesson plans all stand to be impacted, unless the school finds a way to pay for new equipment.

"I do know that the insurance does not cover theft or vandalism of this sort," McMurray said. "So we are not able to access those funds to recover these materials."

The thieves ultimately robbing students of equipment and experiences.

"It's pretty low to steal from kids," he added. "And that's basically what happened here."

McMurray is hoping the community might assist with funding for new gear, ahead of the fast approaching school year.

He pointed to the GoFundMe campaign found here.

McMurray said that although the campaign is calling for the fundraising of $6,000, after reviewing all that was taken, the need is closer to $8,000.

As the COVID-19 delta variant continues to spread, are Bay Area schools considering returning to remote or hybrid learning?