1 dead after Southwest plane lands in Philadelphia with engine damage 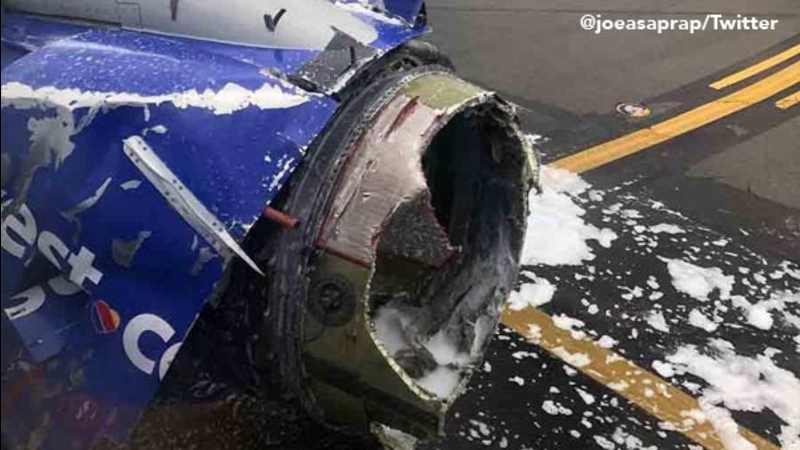 One person hospitalized after emergency landing

PHILADELPHIA -- The NTSB confirmed one person has died as a result of the emergency landing of a Southwest Airlines plane at Philadelphia International Airport on Tuesday.

What a flight! Made it!! Still here!! #southwest #flight1380 pic.twitter.com/Cx2mqoXVzY

"We do have information there was one fatality," NTSB Chairman Robert Sumwalt said. No further details were provided.

Another 12 people were assessed by medics, officials said, and seven of those people were treated for minor injuries.

Southwest said there were 143 passengers and five crew members on board the Boeing 737, which was headed from New York's LaGuardia Airport to Dallas' Love Field. Most passengers walked off the plane onto the tarmac at the airport after landing around 11:20 a.m.

Photos taken by passengers from inside the cabin and posted on social media showed what appeared to be significant damage to the jet, with part of the covering from its left engine ripped off and a window damaged.

Matt Tranchin was on his flight home from New York to his 8-month pregnant wife in Dallas when he saw an explosion ahead of him.

Passenger Amanda Bourman told the Associated Press said she saw emergency medical workers using a defibrillator to help a woman who was taken off the plane after it landed.

The New York resident said she was seated near the back of the plane and was asleep when she heard a loud noise. She said the plane was fairly quiet because everyone was wearing an oxygen mask, while some passengers were in tears and others shouted words of encouragement.
The FAA said that the plane landed after the crew reported damage to one of the engines, along with the fuselage and at least one window.

The Philadelphia airport tweeted that Flight 1380 "landed safely at PHL and passengers are being brought into the terminal." No other details were given.

Passenger Marty Martinez did a brief Facebook Live posting with the caption "Something is wrong with our plane! It appears we are going down! Emergency landing!! Southwest flight from NYC to Dallas!!"

John Goglia, a former NTSB member, told the AP that investigators will take the Southwest engine apart to understand what happened and will look at maintenance records for the engine.

"There's a ring around the engine that's meant to contain the engine pieces when this happens," Goglia said. "In this case it didn't. That's going to be a big focal point for the NTSB - why didn't (the ring) do its job?"

Goglia said the Boeing 737 is a safe plane but engine failures occur from time to time.

"We're pushing the engines to produce as much power as possible," he said. "We're right on the edge. Sometimes they fail, and that's why the containment ring is there."
The engine failure was reminiscent of a similar event on a Southwest Boeing 737-700 jet in August 2016 as it flew from New Orleans to Orlando, Florida. Shrapnel from the engine left a 5-by-16 inch hole just above the wing. Passenger oxygen masks dropped from the ceiling. Pilots landed the plane safely in Pensacola, Florida.