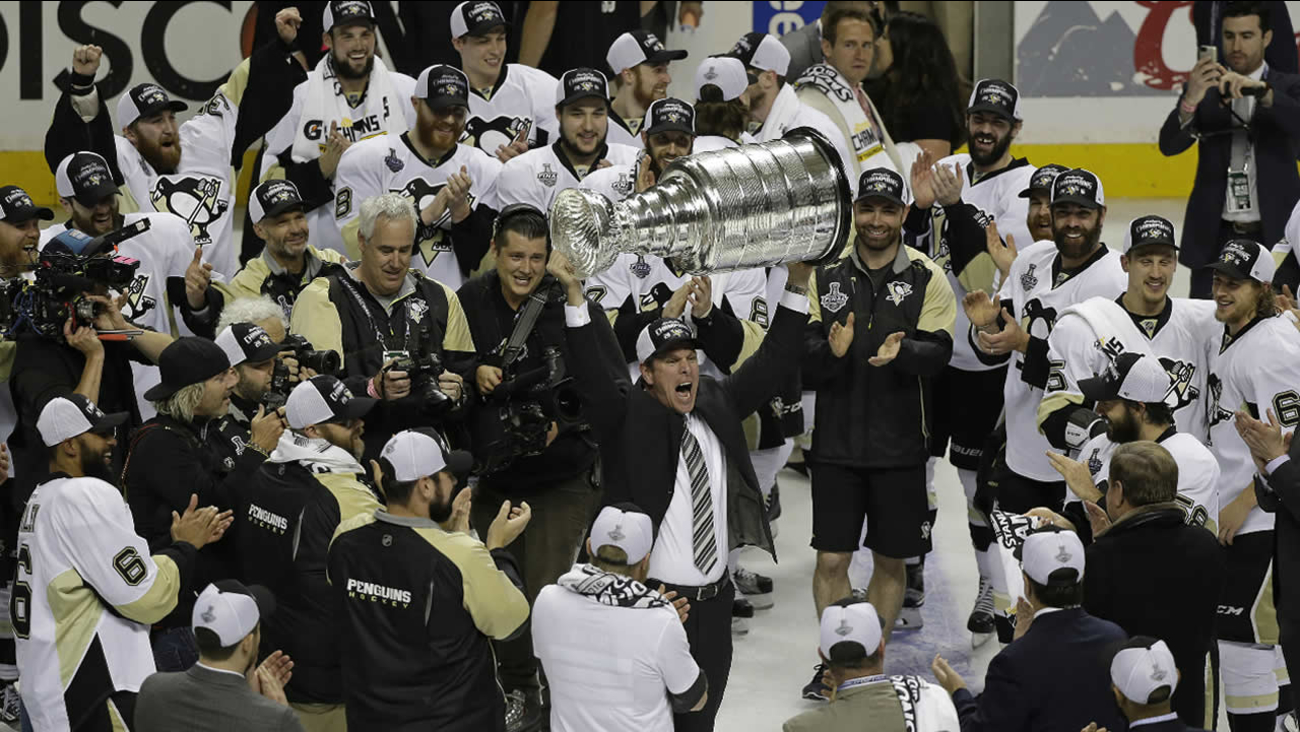 SAN JOSE, Calif. -- A turnaround season for the Pittsburgh Penguins ended with Sidney Crosby once again holding the Stanley Cup.

Crosby set up Kris Letang's go-ahead goal midway through the second period and the Pittsburgh Penguins won the fourth Stanley Cup in franchise history by beating the San Jose Sharks 3-1 in Game 6 of the final Sunday night.

"It wasn't easy getting here, especially the way things started out," Crosby said. "The first half wasn't easy and I think everyone just stuck together, kept going and found some momentum there in March and continued to keep it going."

Brian Dumoulin opened the scoring with a power-play goal and Patric Hornqvist added a late empty-netter. Matt Murray made 18 saves to give the Penguins a championship seven years to the day after they beat Detroit for their third title.

The game ended when Crosby cleared the puck the length of the ice with San Jose on the power play, setting off a wild celebration. All that was left was for Crosby to accept the Conn Smythe trophy as playoff MVP and then the Stanley Cup.

"We tried to keep fighting and slowly started to turn things around," he said. "Everyone has a part in this. It feels really good to win your last game of the season."

Three nights after squandering a chance to become the first Pittsburgh team to win a title in front of the home fans in 56 years, the Penguins finished the job on the road just like they did in Minnesota (1991), Chicago (1992) and Detroit (2009) in past title runs.

The championship in Detroit was supposed to be the first of many for a team led by players like Crosby and Evgeni Malkin. But a series of concussions that led Crosby to miss almost entire season and a half, and a run of early playoff exits that included twice blowing 3-1 series leads prevented a second celebration in the Crosby era until now.

This didn't seem like it would be a season to remember back in early December when the Penguins were the near the bottom of the standings in the Eastern Conference and coach Mike Johnston was fired.

But led by coach Mike Sullivan, the Penguins recovered to make the playoffs as the second-place team in the Metropolitan Division. Pittsburgh knocked off the New York Rangers in the first round, Presidents' Trophy-winning Washington in round two and then rallied from a 3-2 series deficit to beat Tampa Bay in the Eastern Conference final.

The Penguins were in control for almost the entire Cup final. They did not trail until Game 5 at home and responded to a strong push from San Jose in the clincher to avoid a decisive seventh game. Pittsburgh held San Jose to just one shot on goal in the first 19 minutes of the third period to preserve the one-goal lead.

The Penguins sealed it when Crosby blocked a shot from Marc-Edouard Vlasic that set Hornqvist's empty-netter.

Logan Couture scored the lone goal for the Sharks, whose first trip to the final in their 25-year history ended two wins short of a title. Martin Jones made 24 saves and was San Jose's best player for the series.

While the season ended in disappointment, it also was a bit of a breakthrough for Joe Thornton, Patrick Marleau and the rest of a franchise that had been known for playoff collapses, most notably in 2014 when the Sharks blew a 3-0 series lead in the first round to Los Angeles.

There was an electric atmosphere before the final home game of the season in San Jose with fans starting their "Let's Go Sharks!" chants well before the opening puck drop and an elaborate pregame light and video show firing up the fans.

But the Penguins jumped ahead for the fifth time in six games this series after Dainius Zubrus was sent off for tripping when Crosby's line didn't allow San Jose to leave its own zone.

Dumoulin took advantage when his point shot beat Jones for a rare soft goal allowed by the Sharks' netminder. Jones made up for it late in the period with one sequence that started with a save against Crosby on the rush and ended with a pad save that robbed Conor Sheary to keep it 1-0.

Chris Kunitz came up with the defensive play of the period when his speed on a backcheck helped thwart a breakaway chance for Joel Ward. The Sharks tied it early in the period when Couture beat Murray with a big shot for his 30th point of the postseason.

Pittsburgh answered 1:19 later when Crosby sent a pass from behind the net to Letang, who beat Jones from a sharp angle to the short side to make it 2-1.

NOTES: Sharks F Melker Karlsson missed a few shifts in the first period after falling awkwardly into the boards and limping off the ice. ... Couture joined Philadelphia's Daniel Briere (2010), Malkin (2009) and Crosby (2009) as the only players in the past 20 years with 30 points in a postseason.

An amazing season comes to an end.

"This is a hard point to get to, it's been 25 years." said Peter DeBoer, head coach of #SJSharks, in post-game news conference.