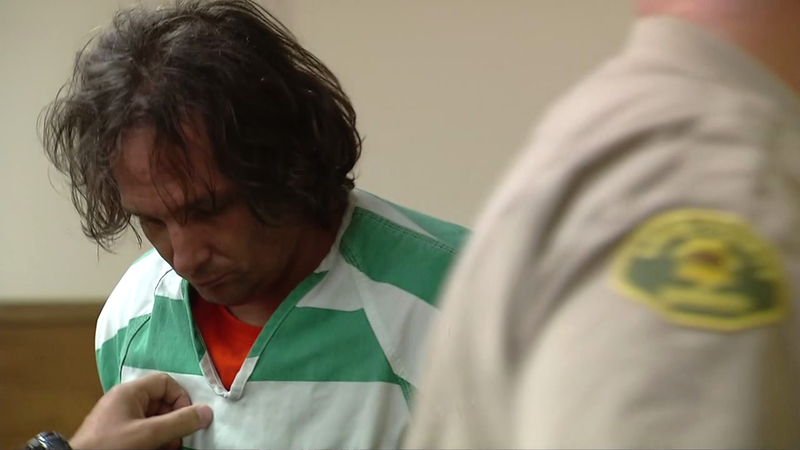 The man accused of intentionally setting the Clayton Fire made his first court appearance Wednesday. Damin Pashilk faces a total of 19 charges, 13 of those charges are arson in connection with several fires in Lake County over the past year. Other counts include charges for possession of meth and traffic offenses, including driving on a suspended license.

In court, Pashilk covered his face. He did not enter a plea and is expected back in court on September 7 at 8:15 a.m. Pashilk is being held at $5 million bail.

The 40-year-old worked in construction in San Francisco at one point. A source with the department of corrections tells the I-Team's Dan Noyes that Pashilk learned to be a firefighter, working as an inmate firefighter in Susanville in 2007.

Crews have made progress battling the massive Clayton Fire that destroyed at least 100 homes and burned nearly 4,000 acres in Lake County. Officials said full containment is is expected this weekend.

Although crews are making progress battling the fire, officials said it could be days before all residents are allowed back into their homes. "We will not open the area until it's safe. That includes removing any trees that might fall, and any power lines," Cal Fire spokesperson Brice Bennett said.

In the meantime, evacuees are waiting nearby at a Red Cross shelter. They have found a bright spot there saying the center has turned into a good support group. "When we're at home, we're in our own separate little cacoons, but when we're drawn together, the wonderfulness in people comes out and there's so many wonderful people here and you get to talk with people and share their experiences, so many people lost their homes and their businesses," evacuee Frances Hart said.

Firefighters said they're working as quickly as they can to pick up the pieces from what the Clayton Fire left behind. They're not only tending to power poles and fragile trees, but also working to retrieve belongings at the Habitat for Humanity offices where they salvaged records for employees.

Smoke or flames can't be seen anymore, but you do still see Bay Area firefighters on the scene. "It only takes one single ember to start this fire up again. So, with the probability of ignition at 100 percent we're making sure that this fire is 100 percent dead out there and there are no hot spots," Bennett said.

Some Lake County residents returned to their homes Tuesday only to find they'd lost everything.

It's was a homecoming that Starr and Michael Skidmore never wanted. They're seeing the devastation of the Clayton Fire up close for the first time. "I have nothing left. It's all destroyed," Michael said.

The family's Lower Lake home and seven rental cottages burned to the ground over the weekend when a wall of flames sent them running for their lives."I was lucky that I got my chickens and my dog, but I'm still looking for my three cats," said the Skidmore's granddaughter Gracie Matthies.
The Skidmore's auto repair shop is the only thing still standing. Down the street, Duane Barbic is remembering, what was. "You know, it's like watching the Titanic go down, except the house when up in smoke," he said.

Barbic's pride and joy, a Victorian built in 1887, is in ashes. A garden statue is all that's left.

The neighborhood is now unrecognizable from what Google street view currently shows. "I got $238,000 in insurance to put back into this. I don't how much house that's going to buy," Barbic said.
Tim Hidson is returning home after sleeping three nights in an evacuation shelter. His house in the Avenues neighborhood is still standing. "Fire was coming this way. We could see it from our back porch," he said.

Others weren't as lucky. The Skidmores are now starting over. "We were just now feeling the blessings of what we worked our tails off for. Now we have no home," Starr said.

The recovery effort the town is facing is immense. State officials will answer questions at a public meeting on the football field of Lower Lake High School at 7 p.m. Friday.

The St. Helena Hospital has reopened after the Clayton Fire forced patients to evacuate last weekend. They were transferred to the Sutter Lakeside Hospital in Lakeport. Executives at St. Helena hospital told ABC7 News the facility did not take on any damage because of the fire and started accepting patients once again at 7 a.m. Wednesday.

Officials are asking anyone who wants to help the fire victims to make financial donations rather than donating items.

It's unknown when police will allow people back into the neighborhood. Full containment on the fire is expected sometime this weekend.

We have activated our Disaster Response Tool for those affected by the Clayton fire in California. https://t.co/ibDTptgWyl #ClaytonFire 1/2