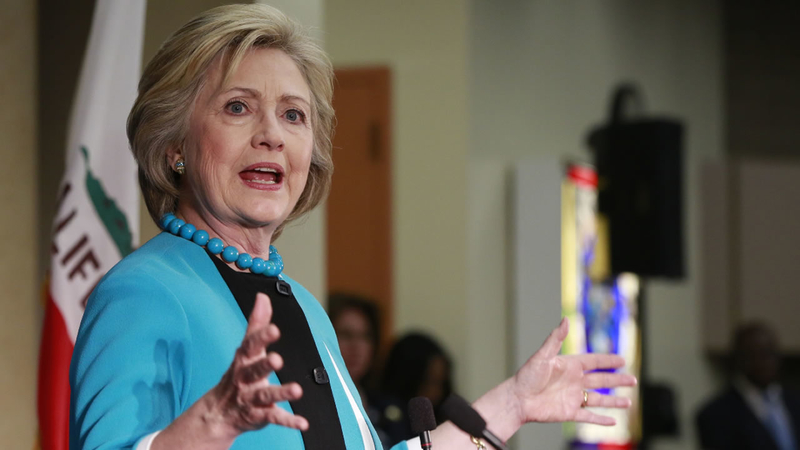 SAN FRANCISCO (KGO) -- Hillary Clinton will be back in the Bay Area Friday after facing hundreds of protesters Thursday night in Los Angeles.

Some in San Francisco vow to give her the same type of welcome. Clinton's campaign won't say where Friday afternoon's San Francisco event will be held at the Masonic Temple on Nob Hill. There are signs and cones there saying no parking will be allowed.

Maybe this is what the Clinton campaign is trying to prevent: protesters showed up at her event in Los Angeles Thursday night.

Clinton only mentioned Bernie Sanders once in her speeches. She seemed more focused on the general election and Donald Trump as she talked about immigration reform.

"I think anyone running for office should spend as much or more time listening than talking. I know I will be way ahead in that category against Donald Trump, there's no question about that," Clinton said.

"Clinton has done nothing to earn my vote. I feel that Bernie Sanders represents my personal beliefs and what I believe in this country," Bernie Sanders supporter Maria Estrada said.

Clinton will be speaking in Oakland at La Escuelita Elementary to a large crowd this afternoon. She chose Oakland and this working class neighborhood because she will be talking about her plans to raise income for families and breaking down barriers.

The San Francisco event is sold out. It will feature actress Elizabeth Banks and both California senators. It starts at 5:00 p.m., so beware there could be some lane closures and congestion late in the afternoon.

Heads up! Hillary Clinton will be at Oakland's la escualita school at 4:00 today and then on to SF. Protestors say event is at the Masonic.

While the delegate math is not in their favor, supporters of Bernie Sanders believe Clinton is vulnerable and their candidate can win the nomination.

The Bernie Bus arrived in the Bay Area for the first time on Thursday. It made a stop at Berkeley City College.

The bus is being driven around the nation by Sanders' earlier supporters, National Nurses United. Expect to see a lot of that big red bus between now and the June 7 primary.