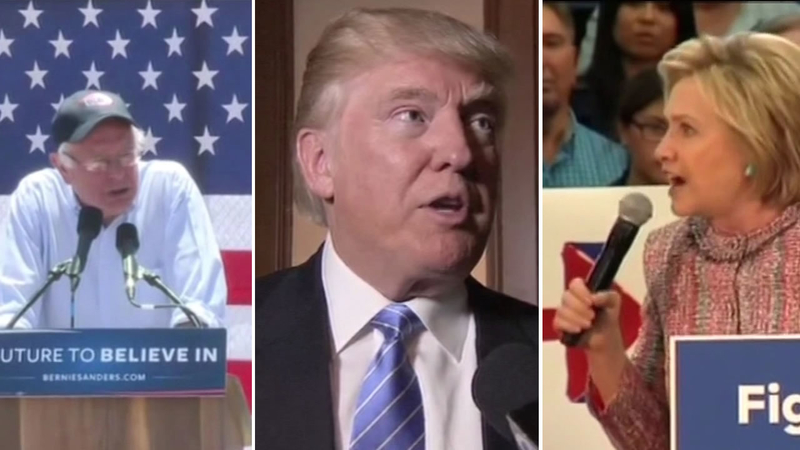 Hillary Clinton left a family-oriented fund raiser at a home in Atherton Wednesday night. Ticket prices ranged from $500 to $27,000.

Earlier she drew both supporters and protesters to a rally in Monterey County. She held a rally in Salinas in the afternoon.

It's probably not a good idea to disappoint voters so close to Election Day, but that's exactly what happened when hundreds who really wanted to show their support were turned around from the rally held at Hartnell College

Farmworkers, students and other supporters stood patiently in line for hours, while protesters got on a bullhorn and tried to create friction with the faithful.

One man held a sign that read: "Women are not fit to be president."

Man holds "Women are NOT fit to be President" sign outside Clinton's rally pic.twitter.com/S2Ya6MUAyU

He was met with anger from the other demonstrators.

Some of the Sanders supporters protesting Clinton tore up the man's "women are not fit to be president" sign pic.twitter.com/t6JScCYgcQ

That sign was eventually torn up by a protester carrying a sign that read: "Hillary is not my abuelita!"

Michael Garcia, 27, (on the right) is the Clinton protester who tore up the "not fit to be president" sign. pic.twitter.com/XusZouCzc5

Most of the supporters were entrenched, not willing to bend their views about Hillary Clinton, except for a few individuals like undecided voter Fernando Sanchez.

"I am kind of leaning towards Bernie Sanders actually because I am young," he said. "He speaks to people that are young like me who went to college and have a little bit of debt, so I want to see if she touches bases on that today and if I should change my opinion."

Clinton knew her audience there. Many in line were farmworkers or their children, concerned about the status of immigration policy and reform when the guard changes at the White House. Clinton went into attack mode against Donald Trump.

"He's not only talking about ripping families apart, is he?" Clinton asked. "He is talking about deporting more than one half of the 2.4 million farmworkers who help feed our country."

Several hundred had to listen to that message outside over speakers because they couldn't get inside.

Crowd that couldn't get into rally listen to @HFA on speakers outside @HartnellCollege gym. #abc7now pic.twitter.com/V67eHuMV3R

The campaign turned down a larger 2,000 capacity venue at Hartnell College, choosing instead the 800 person gym. And Clinton apologized to the disappointed fans.

However, that didn't stop them from loading up on $5 campaign buttons. Or joining a Gilroy woman who led them in a song she composed eight years ago for Clinton's first run for the presidency.

Protesters also waited for trump outside Jimmy Kimmel's studio in Hollywood ahead of his appearance on the show. And R&B singer The Weeknd and rapper Belly canceled their performance on Kimmel because of Trump. Backstage, Trump spoke to our ABC7 News sister station in Los Angeles.

Clinton has events scheduled in San Jose and San Francisco Thursday and there are reports she'll start airing TV ads in California Friday.

Crowd that couldn't get into rally listen to @HFA on speakers outside @HartnellCollege gym. #abc7now pic.twitter.com/V67eHuMV3R

Fernando Sanchez wants to hear from @HFA before making up his mind how he will vote but is favoring @BernieSanders. pic.twitter.com/fzWB1gg1ji