Obama to nominate Scalia successor 'in due time' AP
RANCHO MIRAGE, Calif. -- President Barack Obama declared Saturday night he would seek to fill the Supreme Court seat left vacant by the death of Justice Antonin Scalia, charging into a heated and likely prolonged election-year fight with Republicans in Congress. Obama said a nomination was "bigger than any one party."

With a half-dozen or more major cases before the court, Obama said he planned "to fulfill my constitutional responsibility to nominate a successor in due time."

The Senate should have "plenty of time ... to give that person a fair hearing and timely vote," he said.

The court has already heard - but not decided - big cases involving immigration, abortion, affirmative action and public employee unions. With many cases recently decided by 5-4 margins, the vacancy could have major repercussions, both legally and in the presidential race.

Obama is praising the late justice as a brilliant legal mind who influenced generation of lawyers and students.

Obama's remarks followed those of Republicans who wasted little time Saturday night, as news of Scalia's unexpected death spread, arguing that Obama should leave the choice to his successor.

"The American people should have a voice in the selection of their next Supreme Court justice," Senate Majority Leader Mitch McConnell said. "Therefore, this vacancy should not be filled until we have a new president."

His position was echoed by a pair of senators seeking the GOP presidential nomination: Ted Cruz and Marco Rubio.

The nomination, Obama's third of this tenure, fight in the Senate could determine the tenor of much of Obama's final year in office - and ricochet through the campaign to replace him. Obama, who already has little goodwill on the Hill, faces stiff opposition from Republicans hungry for the chance to further tip the court to the right. A confirmation process often takes more than two months, but could be drawn out longer by the Republican-led Senate.

Senate Democrats made clear that they would work vigorously to keep Republicans from trying to run out the clock. They quickly offered counterarguments to Republican statements that the decision should rest with the next president.

"It would be unprecedented in recent history for the Supreme Court to go a year with a vacant seat," said Senate Minority Leader Harry Reid of Nevada. "Failing to fill this vacancy would be a shameful abdication of one of the Senate's most essential constitutional responsibilities."

Democrats pointed out that Justice Anthony Kennedy was confirmed in an election year - 1988 - the final year of Ronald Reagan's presidency. Kennedy had been nominated in November 1987 after the Senate rejected Robert Bork and Judge Douglas Ginsburg bowed out.

Democrats also argued that waiting for the next president in January 2017 would leave the court without a ninth justice for more than the remainder of Obama's term as Senate confirmation on average takes just over two months.

Patrick Leahy, the ranking Democrat on the Senate Judiciary Committee, said, "The Supreme Court of the United States is too important to our democracy for it to be understaffed for partisan reasons."

The impact on the campaign trail was immediate. Cruz issued a statement urging Obama to hold off nominating even as news of Scalia unexpected death spread. Hillary

Clinton, on the other hand, said, "The Senate has a constitutional responsibility here that it cannot abdicate for partisan political reasons."

Before Scalia's death, the court was ideologically split with many 5-4 decisions. The remaining justices are generally divided among four conservative votes and four liberal votes - leaving the next nominee crucial to the court's direction, potentially for years to come.

The court faces a crowded docket of politically charged cases that were certain to resonate in the presidential campaign on issues such as immigration, abortion, affirmative action, labor unions and Obama's health care law. Decisions were expected in late spring and early summer on whether the president could shield up to 5 million immigrants living in the United States illegally from deportation.

Scalia was a reliable conservative who often provided the 5th vote to break a tie in the most ideologically divisive cases. The immediate impact of his death for the current term means that the justices will now be divided 4-4 in many of those cases. If there is a tie vote, then the lower court opinion remains in place.

There are no time restrictions on appointing a new justice. If the Senate confirms a nominee, he or she could begin sitting to hear cases for the remainder of the current term.
Related topics:
politicswashington2016 electionelectionu.s. supreme courtbarack obama
Copyright © 2020 by The Associated Press. All Rights Reserved.
RELATED 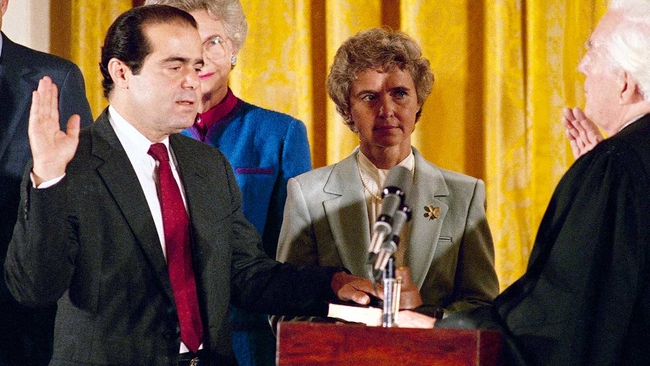 Report: Another FBI suspect may have given Mayor Breed a gift
2nd round of evacuees to leave Travis Air Force Base