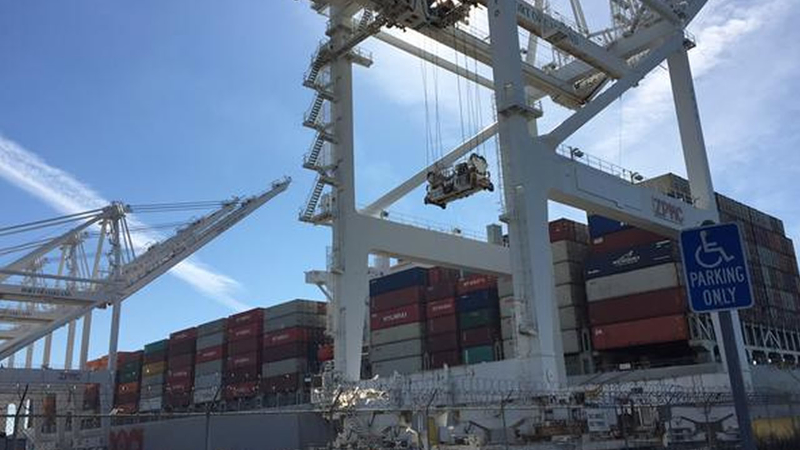 OAKLAND, Calif. (KGO) -- It's been another quiet day at ports up and down the West Coast.

At the Port of Oakland, ships are stuck waiting to have containers offloaded. The standstill is part of a labor dispute between dockworkers and their employers.

With the West Coast ports virtually shut down, some are calling for the federal government to step in.

U.S. Secretary of Commerce Penny Pritzker was in San Francisco taking a tour of a company called Dodocase that relies heavily on trade and exports.

Pritzker told ABC7 News it's not time for the federal government to step in to the ongoing labor dispute at west coast ports. Not yet.

"This is not just a damage to our economy. This also is going to hurt global trade. And so, we really are urging and encouraging the parties to resolve this at the negotiating table, and to do so now," said Pritzker.

While the West Coast ports were mostly still on Thursday, negations between the unoin and the Pacific Maritime Association are ongoing.

"The focus of the union is on the negotiations. We want to resolve this without the shut downs that the employers are imposing and causing problems for everyone, especially customers who need their containers," said Craig Marrilees with the International Longshore and Warehouse Union.

All quiet @PortofOakland today as labor dispute drags on and work effectively shut down for long weekend.#mapit pic.twitter.com/pf0mrCIOdH

Meantime, truckers at the port don't know how much longer they can wait, while their lot fills up with shipping containers that can't be moved.

"They're still charging us penalties on the containers that we can't pick up, and we cannot return. It's caused by them. We're busting at the seams. Every truck yard, every yard that you see at the port is full of containers," said Bill Aboudi, a truck driver.

The port is supposed to re-open on Friday with limited activity, but then close for the remainder of the long holiday weekend.