Trump pushes back amid signs of strain in transition 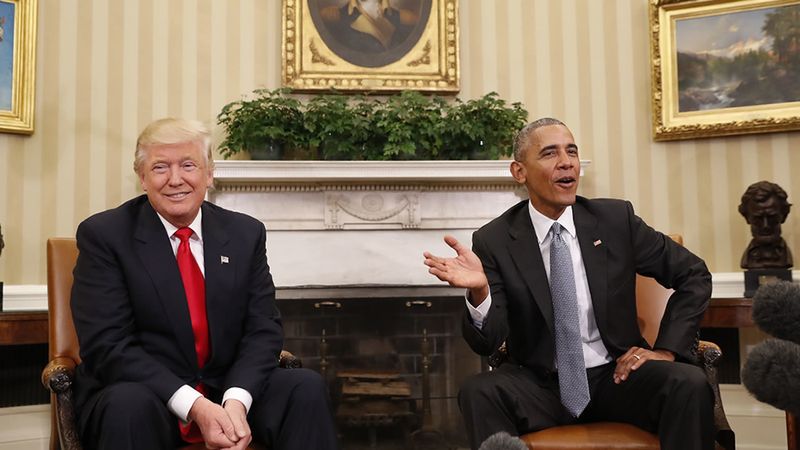 Trump pushes back amid signs of strain in transition

NEW YORK -- President-elect Donald Trump rejected claims of chaos and infighting straining his transition, declaring that he is running a "very organized process." His son Eric Trump said new appointments were likely to be announced Wednesday, though other aides suggested a slower process.

Trump has kept a low-profile since his stunning upset victory a week ago, letting advisers and allies to set the tone. He has wielded his Twitter account as his main tool for disputing talk of his transition as unwieldly and unprepared.

The failing @nytimes story is so totally wrong on transition. It is going so smoothly. Also, I have spoken to many foreign leaders.

"It is going so smoothly," Trump wrote Wednesday.

Despite Trump's assurances, people close to the transition process described advisers "fighting for power" as the Republican plunges into the enormous task of setting up his administration. Trump will be inaugurated Jan. 20.

The billionaire businessman has effectively created two power centers in his White House even before taking office. He named Republican National Committee Chairman Reince Priebus as his chief of staff and flame-throwing media mogul Steve Bannon as his chief strategist, calling them "equal partners." Trump's son-in-law Jared Kushner also is deeply involved in the transition

Some people close to Trump's efforts expressed misgivings with the uncertain organization. They weren't authorized to discuss internal deliberations publicly and spoke on condition of anonymity.

"The beginning of any transition like this has turmoil because it's just the nature of the process," Former House Speaker Newt Gingrich, an ardent Trump ally, said as he left Trump's transition headquarters in Washington. "I think what you're seeing will become clearer over the next two or three weeks as they build out the Cabinet and figure out some civic things."

Advisers arrived at Trump Tower Wednesday for meetings, including Eric Trump, who told reporters it was "likely" some positions would be announced during the day. However, Trump spokesman Jason Miller later said the team was "not going to rush to put names forward until we're absolutely sure."

Trump emerged from his eponymous New York tower briefly Tuesday night for a private dinner with his family. He traveled without the traditional press pool of journalists, breaking a protocol designed to ensure the public has access to information about the president-elect's whereabouts, schedule and meetings.

Many of those entering Trump Tower Wednesday are involved in planning for the incoming president's national security and economic teams.

Steve Mnuchin, a former Goldman Sachs banker and a top Trump economic adviser, told reporters the transition team was working on plans for regulatory and tax code changes, and creating an infrastructure bank to pay for improvements to roads and bridges.

"Right now we're still in the planning stages. We want to be in a position where in the first 100 days we can execute the economic plan," said Mnuchin, who is said to be a candidate for Treasury secretary.

Alabama Sen. Jeff Sessions, a loyal Trump supporter, is in contention for multiple jobs, including Pentagon chief and attorney general. Texas Sen. Ted Cruz, who fiercely challenged Trump during the GOP primary but ultimately endorsed him for president, is also among those being considered for the attorney general post, though he is not viewed as a top contender, according to a senior transition official.

Former New York Mayor Rudy Giuliani is a possible secretary of state. But Trump's transition team was reviewing Giuliani's paid consulting work for foreign governments, which could delay a nomination or bump Giuliani to a different position, according to a person briefed on the matter but not authorized to speak publicly about it.

Giuliani founded his own firm, Giuliani Partners, in 2001, and helped businesses on behalf of foreign governments, including Qatar, Saudi Arabia and Venezuela. He also advised TransCanada, which sought to build the controversial Keystone XL pipeline, and helped the maker of the painkiller drug OxyContin settle a dispute with the Drug Enforcement Administration.

MORE: Obama offers Greeks reassurance about US commitment to NATO

A Trump official said John Bolton, a former U.S. ambassador to the United Nations, also was in contention for the top diplomatic job. While he has years of foreign policy experience, Bolton has raised eyebrows with some of his hawkish stances, including a 2015 New York Times op-ed in which he advocated bombing Iran to halt the country's nuclear program.

Vice President-elect Mike Pence is now running the transition team after a shakeup that included the demotion of New Jersey Gov. Chris Christie. Pence spent several hours meeting with Trump on Wednesday. Aides described the session as detailed and extensive.

Pence planned to travel to Washington later Wednesday to meet Vice President Joe Biden at the Naval Observatory, the residence for the nation's No. 2.