Rep. Swalwell condemns Proud Boys who disrupted local Pride event; 'have nothing to be proud of' 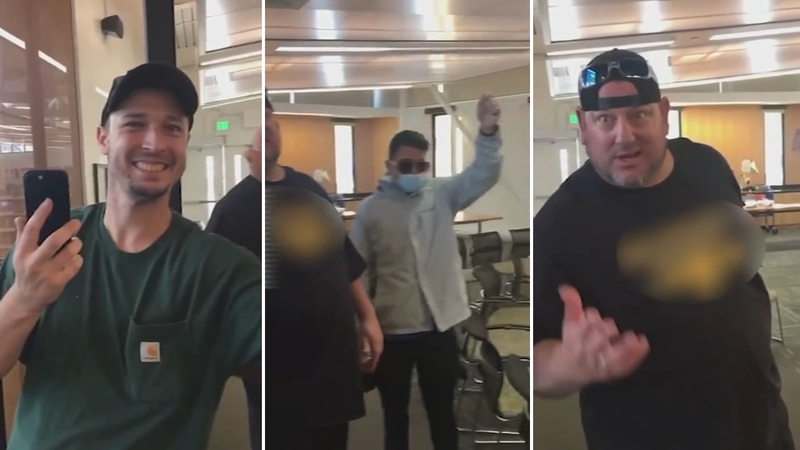 "To the Proud Boys, what I tell you today after talking to this group - you have nothing to be proud of for what you did to children. It would be a compliment to call you boys because you acted like babies," says Swalwell.

In attendance were members of the San Lorenzo and county library staff, the Alameda County Sheriff's Office, and members from the AAPI community, in a show of unity.

The conversation focused on threats faced by the local LGBTQ+ community and the work being done by the sheriff's department in this case.

Swalwell shared an exchange he had with a high school student.

"He said it was pretty terrifying to see the Proud Boys go from the Capital to our local library. This is no longer just something that is at the highest level that they are targeting. They are now targeting people in every community," says Swalwell.

A group of men appeared to be members of extremist group Proud Boys disrupted an LGBTQ+ event for children at the San Lorenzo Library, police say.

The Alameda County Sheriff's Office says when the Proud Boys showed up, they shouted homophobic and transphobic slurs at Dulce, even calling her a pedophile.

Billy Bradford, who is co-founder of Castro Valley Pride, attended the roundtable discussion.

"There are plenty of faith leaders, athletic coaches, youth counselors, and sadly, boy scout troop leaders, who are the pedophiles (the Proud Boys) are looking for. But that's not who they attack," says Bradford. "That's not what they go after. You won't find the Proud Boys going to a Catholic church."

The sheriff's office says it identified and spoke to several of the Proud Boys members, but no charges have been filed. It says it is a matter of free speech versus hate speech.

Alameda County librarian, Cindy Chadwick, says these types of meetings are critical so that elected leaders know what's happening in their communities.

"I think all politics is local. And, we are who make up the American people - small communities. It is important to know that these things that happen, matter," Chadwick says.

Mayor Lily Mei from nearby Fremont was also on hand. She is calling for a united front against all forms of hate and discrimination.

"(This is) unexpected in a smaller city, and I think that's why it is more important than ever that we stand in solidarity with neighboring cities," says Mayor Mei.

The library isn't backing down. They now plan to host Pride events every month through the end of the year, with extra security on hand.