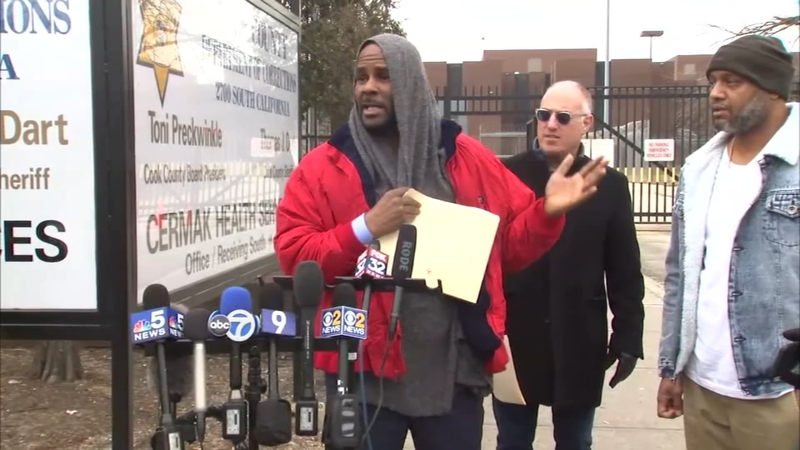 It was immediately unclear who paid the money. Kelly was previously paying $20,000 a month, but had fallen behind. His lawyer said recent allegations have impacted his career.

"I promise you we are going to straighten all this stuff out," Kelly told reporters as he left jail.

On Friday, his publicist Darryll Johnson said the singer planned to pay more than $161,000 he owes in back child support so he can be released that afternoon. However, jail officials said the money was never posted.

Kelly returned to jail this week after he could not pay the money and was led away by deputies and handcuffed following a child support hearing Wednesday.

Kelly was being held in a solo cell under 24-hour observation, which is jail protocol for high-profile inmates, according to the Cook County Sheriff's Department said.

R. Kelly is seen leaving Chicago's Trump Tower before a court apperance in his child support case at the Daley Center.

Kelly is charged with 10 counts of criminal sexual abuse. Last month, the Cook County State's Attorney Office said new allegations have surfaced, and at least three women claim, when they were minors, Kelly sexually assaulted them. Kelly pleaded not guilty to all charges.

After the charges were announced, R. Kelly voluntarily surrendered and spent a weekend in jail before a female acquaintance posted a $100,000 bond to get him out.

R. Kelly's next hearing on the sexual abuse charges is March 22.

In addition, Detroit police now looking into a separate allegation from 2001 with a 13-year-old girl.

Attorney Gloria Allred said she represents the Detroit woman, and shared a comment from her client which reads: "...listening to R. Kelly's denials about what he did to underage girls like me was very hurtful. He needs to tell the truth and he needs to stop playing the victim. He was the adult and I was the child. He had no right to take advantage of me when I was only a 13 year old child."

Meanwhile, his girlfriends, 23-year-old Joycelyn Savage and 21-year-old Azriel Clary defended Kelly in an interview with CBS News. Both deny they've been brainwashed by Kelly and are now turning attention to their own parents.

"Both our parents are basically out here trying to get money and scam, because they didn't agree on what happened, you know, with music or whatever it could be and they're just very upset," Savage said.

R. Kelly returned to court Wednesday afternoon over the $160,000 in child support he owes.

The women allege their families are exploiting their relationships with Kelly for money.

"My dad and my mom, they're starting to send threats to both me and him," Clary said. "They said I'll put all your naked pictures all over the world. I am going to ruin you and I am going to ruin him if he doesn't send $20,000 to this bank account by Monday or I am going to put everything out there then $10,000 after that."

Both sets of parents deny ever asking for money.

City inspectors say singer R. Kelly has not complied with their order to clear what appear to be bedrooms in his near West Side studio space.