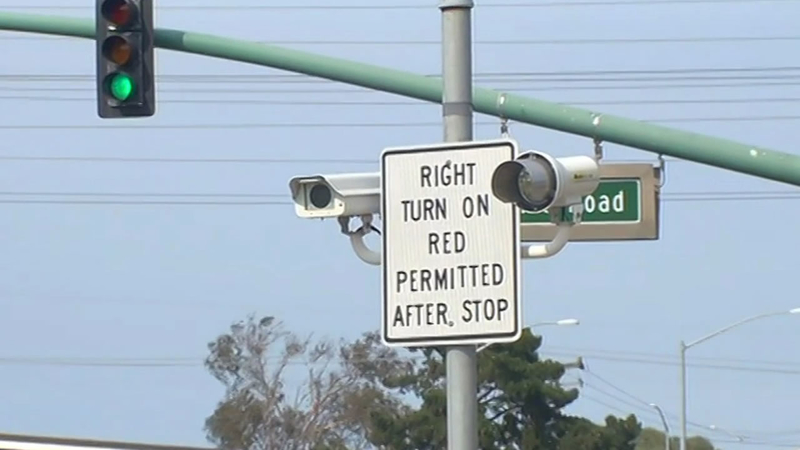 MILLBRAE, Calif. (KGO) -- ABC7 News is getting some answers for what may be behind the huge spike in red light camera violations at the Millbrae Avenue exit and the off ramp from southbound 101 in Millbrae.

The city says the camera was struck and damaged by a truck in April and taken down for three weeks. It was then replaced by a new camera.

"When the new camera was installed, it was repositioned in a better placement and it has captured more violations," said Millbrae spokesperson Angela Louis.

The camera is now capturing drivers making rolling rights, otherwise known as "California Stops." These violations cause the least number of collisions.

Louis says that accounts for the spike in May tickets.

At the Millbrae Avenue intersection, there are three lanes. You can turn right on two of them and they're the ones with the most violations.

On the third lane, you can only go straight. That's the one lane which you'd expect drivers to run right through red light, but there is no camera dedicated to this lane of traffic.

"When you cross directly through an intersection, that is a very dangerous, t-bone type of accident situation and the potential for that could be devastating," said state Sen. Jerry Hill, D-San Mateo.

Hill unsuccessfully authored a bill that would have reduced the fine for rolling rights which averages about $500. He says cities should use red light cameras for traffic safety.

"What I take exception to is when they're used as revenue generators and they look at every opportunity to increase revenue in situations when they're not dangerous," said Hill.

The city of Millbrae 's position is that running a red light is the same whether it's rolling through a right turn or a straight on violation.