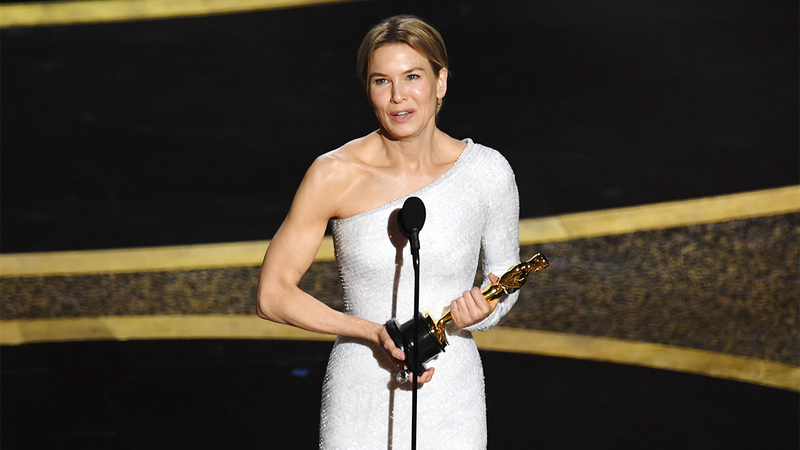 LOS ANGELES -- Renée Zellweger honored Judy Garland as one of the "heroes who united and define us" after her Oscar win for her portrayal of the legendary star of stage and screen.

Zellweger said: "Though Judy Garland did not receive this honor in her time, I'm certain that this moment is an extension of her legacy that began on our film set and is also representative of her legacy of unique exceptionalism and inclusivity and generosity of spirit. It transcends any one artistic achievement."

She used her acceptance speech to discuss how "the best among us...inspire us to find the best in ourselves," invoking well-known historical figures like astronauts Neil Armstrong and Sally Ride, singer Selena, athletes Serena and Venus Williams, abolitionist Harriet Tubman and, of course, Judy Garland.

"When we look to our heroes, we agree. And that matters," Zellweger said.

With a Golden Globe, a BAFTA and a SAG Award already under her belt, the "Judy" star was widely viewed as the frontrunner in the lead actress category at the Oscars. She channeled old-school Hollywood on the Oscars red carpet in a spangled white one-shouldered gown.

On the red carpet earlier in the evening, Zellweger discussed her portrayal of Garland: "I didn't know so much about the circumstances of her early life and the final chapter of her life, and this film was an opportunity to contextualize those circumstances to subvert the notion that her life is tragic. When you look at what she overcame again and again -- her tenacity, that she was still able to give on such high levels and perform on such high levels for such a sustained period of time. She's heroic."

Zellweger was up against Cynthia Erivo, Scarlett Johansson, Saoirse Ronan and Charlize Theron. "Judy" was also nominated for best makeup and hairstyling but lost to "Bombshell."

She told Jimmy Kimmel Thursday that before her win, she had a plan to "not do that spiral" that makes people watching the award show "roll their eyes."

The 50-year-old "Bridget Jones's Diary" star won the Oscar for best supporting actress in 2004 for her "Cold Mountain" performance. She told Kimmel that before her win, she had a plan to "not do that spiral" that makes people watching the award show "roll their eyes."

Despite her forethought, Zellweger said the moment her award was announced was just too weird.

"It just goes out the window," she said. "You're not going to be the geek person that freezes up and can't hear anything and gets emotional, and then somebody says your name, and you hear this like, 'Dooo!' And then you do the geek spiral."

She said she couldn't hear or even remember anything while giving her speech.

"I remember somebody was talking, and I guess it was me," she said.

She said she was then astonished by the amount of A-list celebrities staring back at her.

"I remember thinking, 'Gosh, it's like the 'Sergeant Pepper' album cover.' All these famous people just frozen, staring," she said. "I remember, Sean Penn was at 12 o'clock, and he was just smiling."