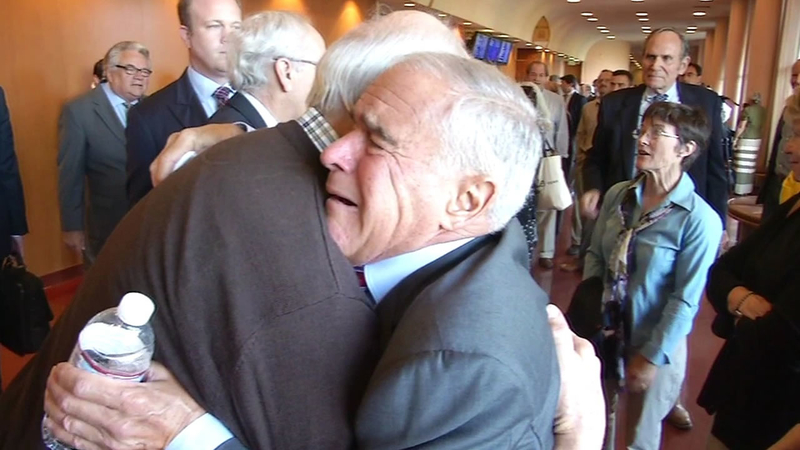 MARIN COUNTY, Calif. (KGO) -- There was applause and tears from friends and neighbors on Thursday for a Marin County doctor who is facing felony charges for shooting a man who followed him home after a road rage incident.

This story raises all sorts of hot button issues so the ABC7 News I-Team is looking into it. Questions are being raised such as: how can you defend yourself in your own home? And if you have a collection of legal firearms, should you be penalized for it?

Simon seemed overwhelmed by the show of support from friends and neighbors, who tell me he's a "pillar of the community". All of them couldn't fit in the Marin County courtroom for Simon's arraignment on felony charges -- attempted voluntary manslaughter and assault with a firearm.

"It's very important during this difficult time that Dr. Simon knows he has the support of his community and the love of his family," defense attorney Charles Dresow said.

Two months ago the doctor and his wife were riding in their red Smartcar when they had a road rage incident with a retired mortgage banker. Tiburon resident Bill Osenton, 69, followed the couple home and tried to pull into their garage. Police say the door came down on his silver Mercedes and that Simon went inside for his .357 Ruger, came out, fired a warning shot, and then hit Osenton twice in the stomach.

His neighbors defend Simon's actions, saying he was protecting his wife.

"They were both scared, you know and he told him to leave, and I don't know why that man wasn't charged, that is what's really bothers me," neighbor Carol Nelson Schrauth said.

Berberian: "The use of deadly force was not a reasonable decision, based on all the facts that are going to come out in the various hearings we have."
Noyes: "The person who was shot drove into his garage."
Berberian: "Well, you'll see what 'drove in' means during the preliminary hearing, he was on the property, it's going to be clear from the evidence, yes."

During the arraignment, the judge granted Berberian's request for a $250,000 bail, based in part on public safety. The District Attorney pointed out that police confiscated more than 50 firearms and more than 200 boxes of ammunition from Simon's home. His attorney argued all the weapons were legally registered, kept in safes, and that Simon is an avid outdoorsman and hunter.

Berberian: "I believe that it was a public safety factor that he had that type of firearm possession."
Noyes: "But, all the guns are confiscated."
Berberian: "That is true, those weapons are now in possession of police authorities."

Simon's attorney spoke to his supporters after the hearing.

"Dr. Simon is constitutionally entitled to defend himself from an assailant and I am confident that in this court proceeding that will be what happens," Dresow said.