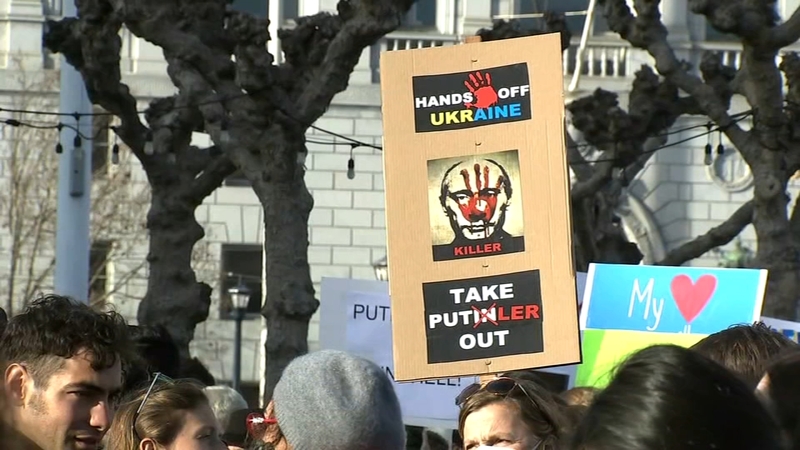 Hundreds rally in SF to support of Ukraine after Russia invasion

SAN FRANCISCO (KGO) -- With missiles streaking across the skies, Russia is advancing its invasion of Ukraine from the north, south and east.

In response, President Joe Biden announced a new round of sanctions in conjunction with U.S. allies, targeting more Russian banks, the country's elites and military - cutting them off from American financial markets.

"Putin's aggression against Ukraine will end up costing Russia dearly economically and strategically. We will make sure of that," Biden said.

The president is also sending 7,000 more U.S. troops to NATO countries in Eastern Europe as a show of force.

This comes as administration officials warn that Russian troops will soon try to topple the Ukrainian government, sending Ukrainian President Zelensky and his family into hiding.

With a full-scale invasion underway, some are now concerned over what Putin's end goals may be.

Steven Fish is a professor at UC Berkeley, who has studied authoritarianism and post-communist countries.

It's a big gamble, Fish says, that will not be easy.

RELATED: Why is Russia invading Ukraine?

"There's 40 million people in Ukraine. Most of them are very hostile to Putin and his invasion. And governing them is going to be extremely difficult to do," he said.

But Fish says this war is about a lot more than just Ukraine.

He believes it's also about a wider issue of democracy verse autocracy in the international system.

"What we see here is not a conflict between East and West, or conflict over Ukraine itself. Ukraine is just kind of ground zero right now," Fish said.

It's a view that was shared by other local Ukrainians in the Bay Area, too -- Hundreds of whom descended on San Francisco's City Hall Thursday afternoon to rally for Ukraine.

Many of them have family still in the country.

"Am I lucky or it's almost like miracle, but I am here," she said.

A Berkeley grad student at the San Francisco rally said her loved ones have been sleeping in the metro subway stations in Kyiv to try to stay safe, in case there are more missiles launched by the Russian military.

And while the world waits to see what happens next, Ukrainians say they'll keep fighting, both for their people and also their homeland, making sure Vladimir Putin has a fight on his hands.

"This is when he lost because Ukrainians will resist. They will resist, they will not back down," said rallygoer Vira Iefremova.