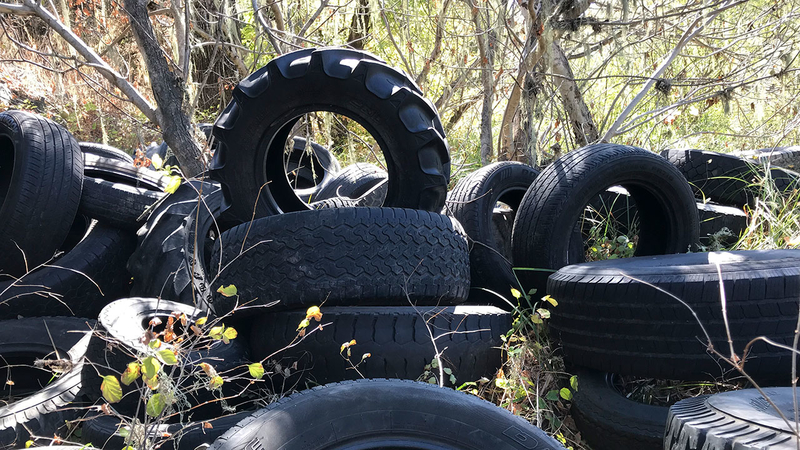 HOPLAND, Calif. (KGO) -- Hundreds of old tires dumped in southern Mendocino County, and in the most sensitive of environments.

The Russian River flows peacefully just south of Squaw Rock in Mendocino County. Traffic does, too. Most drivers heed the signs warning against littering and dumping.

But, not all, apparently.

Environmental abuse discovered next to and in the #RussianRiver —-#mendocino County. Hundreds of tires dumped in a senstive area.#abc7now pic.twitter.com/kUOewOIKja

Both are active stewards of the local environment, and they are disgusted to have discovered hundreds of used tires dumped in the last month in multiple areas. Along the Russian River, they're stacked like tombstones in some cases.

"The Russian River watershed is our main source for drinking," said Chris, who works at the Clean River Alliance. "It's a wildlife corridor. The last salmon that exist around here are in this river."

The mystery-- who put them here?

"It's become habitual," surmised Ostrom. "Having worked in a tire shop I know each has a serial number tied to a warranty. It is easy to know where they came from and then in-turn find out who they paid to haul these tires."

The Mendocino County Sheriff's office has opened an investigation, but will not comment beyond that. Meantime, Chris Ostrom has not been able to idly by, especially when cleaning up such messes is part of his nature.

Chris and his PacOut Green Team have already hauled some 200 tires from another location. With so many more, "Every time one of these shredded tires wander down river, people, fish will cut themselves. The belts are very sharp."

Who dumped the tires in this pristine area along the Russian River? #abc7now pic.twitter.com/UKyynHetg0

Just downstream, Miguel Elliott knows the risk all-too-well. He avoided a couple of tires while swimming this afternoon.

"It is thoughtless, careless, disrespectful."