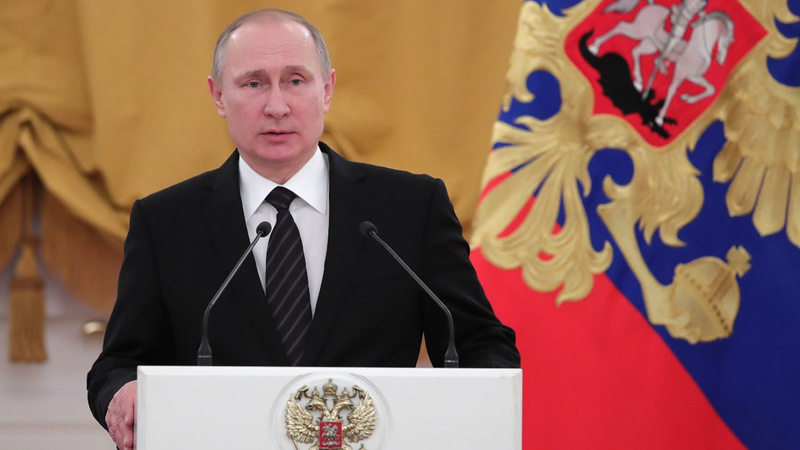 MOSCOW -- President Vladimir Putin castigated the United States on Friday for trying to punish Russia but said his country will not immediately retaliate and instead will wait for a new U.S. approach by Donald Trump. The president-elect praised Putin's move and called him "very smart."

Great move on delay (by V. Putin) - I always knew he was very smart!

Putin said no U.S. diplomats will be ousted in retaliation for President Barack Obama's decision to impose sanctions and expel Russian diplomats over allegations of Russian meddling in the American presidential election. The Russian leader said he reserves the right to hit back in the future, but suggested it will be unnecessary because he expects to work with Trump's administration to improve U.S.-Russia ties.


RELATED: How Russia sanctions may put Trump in a bind

Still, Putin called Obama's move a "provocation aimed at further undermining Russian-American relations" less than a month before Trump takes office. In addition to sanctions targeting Russian spy agencies, the U.S. kicked 35 Russian diplomats out of the U.S. and said they were spies.

Trump's reaction, as it often does, came via Twitter. "Great move on delay (by V. Putin)," Trump tweeted. "I always knew he was very smart!"

He pinned the tweet to the top of his Twitter page so that it would remain there prominently and indefinitely even after other tweets are sent.

The move by the incoming president to side with a foreign adversary over the sitting president was a dramatic departure from typical diplomatic practice, further fueling the burgeoning controversy over what the Obama administration says was a cyberattack against America's political system.

Putin's decision to hold off on retaliation came as a surprise; tit-for-tat expulsions are common practice, and Foreign Minister Sergey Lavrov had suggested hours before that Russia would oust 31 American diplomats.

"The Russian diplomats returning home will spend the New Year holidays with their relatives and dear ones," Putin said in a statement published on the Kremlin website. "We will not create problems for U.S. diplomats. We will not expel anybody."

He added: "Moreover, I am inviting all children of U.S. diplomats accredited in Russia to the New Year and Christmas parties at the Kremlin."

New Year's Eve has been the main holiday in Russia since Soviet times. Russians celebrate Christmas on Jan. 7.

Putin appeared to aim at playing a long game and made a barbed reminder that Obama is a lame duck.

Dmitry Trenin, director of the Carnegie Moscow Center, called the response "a different kind of tit-for-tat" in a tweet: "Even as Obama seeks to constrain Trump in his Russia policy, Putin counters that step with a show of magnanimity."

The diplomatic confrontation between Washington and Moscow, which had been festering even before Trump won the Nov. 8 presidential election, puts pressure on the billionaire businessman not to let Russia off the hook after he takes office on Jan. 20.

Russia's government had threatened retaliation, and it continues to deny U.S. accusations that it hacked and stole emails to try to help Trump win.

Trump said the U.S. should move on, but in a sign he was no longer totally brushing off the allegations, he said he plans to meet with U.S. intelligence leaders next week to learn more.

Obama's sanctions targeted the GRU and FSB, the Russian intelligence agencies the U.S. said were involved in the hacking attacks. In an elaborately coordinated response by at least five federal agencies, the Obama administration also sought to expose Russia's cyber tactics with a detailed technical report and hinted it might still launch a covert counterattack.

"All Americans should be alarmed by Russia's actions," said Obama, who was vacationing in Hawaii.

Yet the sanctions could easily be pulled back by Trump, who has insisted that Obama and Democrats are merely attempting to delegitimize his election.

Medvedev, who focused on improving U.S.-Russia ties when he was president from 2008-2012, called the latest diplomatic breach "sad" in a Twitter post.

U.S. relations with Russia have suffered during Obama's presidency as he and Putin tussled over Ukraine, Edward Snowden and Russia's support for Syrian President Bashar Assad. Maria Zakharova, a Russian foreign ministry spokeswoman, took to Facebook to call the Obama administration "a group of foreign policy losers, angry and ignorant."

As part of the punishment leveled against Moscow, the U.S. kicked out 35 Russian diplomats in response to Russia's harassment of U.S. diplomats. Russian recreational compounds in New York and Maryland that U.S. officials said were being used for intelligence were also shut down.

It was the strongest action the Obama administration has taken in response to an alleged cyberattack, and it was more comprehensive than last year's sanctions on North Korea after the hacking of Sony Pictures Entertainment. The new penalties add to existing U.S. sanctions over Russia's annexation of Crimea and support for separatists in eastern Ukraine.

Senior Obama administration officials said that even with the penalties, the U.S. had reason to believe Russia would hack other nations' elections and might well try to hack American elections in 2018 or 2020. The officials briefed reporters on a conference call on condition of anonymity.

Though the FBI and Department of Homeland Security issued a joint report on "Russian malicious cyber activity" the government still has not released a broader report Obama has promised detailing Russia's efforts to interfere with U.S. elections.