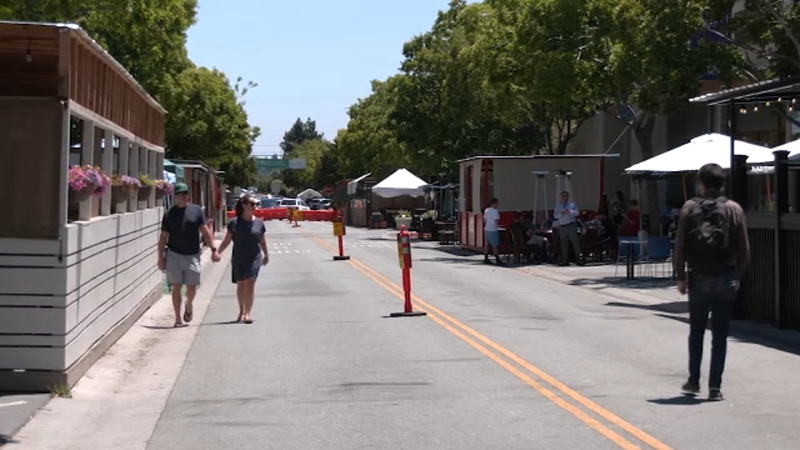 SAN CARLOS, Calif. (KGO) -- Despite the state reopening its economy, some small businesses in Downtown San Carlos are still struggling in a big way.

Since last Summer, the 700 block of Laurel Street has been closed to accommodate for dining during the pandemic. The city council says it has been great for restaurants and residents.

But, now with California reopened, some businesses say it's time for the street to reopen too.

"We are asking them to remove these so we can start having some business as well as the restaurant," Dynasty Cleaners Owner Barry Taleghani said.

RELATED: Palo Alto officials must decide whether or not to keep downtown closed to cars

Laurel Street is filled with family-owned businesses, like Dynasty Cleaners, some there for decades.

These owners say the lack of parking and access to their stores have led to dire financial struggles.

"We're struggling. Our business is down 70%," Sarrtori President and CEO Fredy Joudieh said.

"There are four businesses that have already closed," Taleghani said. "There are two other businesses, that I know of, that have not signed a lease because they say if the street doesn't open up, they're not going to get enough customers to pay their expenses."

When we visited the street, we learned the barricades don't just cause problems for the businesses, but some the customers as well.

And how did she get here once she found a parking spot?

"It's really, really challenging," Joudieh said. "It seems like our dignitaries in town are focusing, respectfully, only on the restaurants. We've been here over 25 years in the Laurel Street in San Carlos and we feel like we've been left alone."

In May of this year, Ron Collins was in the minority of a 3-2 City Council vote that extended the street closure of the 700 block of Laurel Street until September 2022.

He says there is no plans for a revote, but he wants to discuss a future solution that works for all.

"We need to have a plan," Collins said. "We have an obligation to take care of everybody and find a way that we can continue to have a robust downtown, but at the same time, not harm certain elements of it that aren't restaurants."

"Give us our parking back, as many as we can," Taleghani said. "Let the restaurants survive and let us survive as well. The way it is, most of us are going to be out of business sooner rather than later."