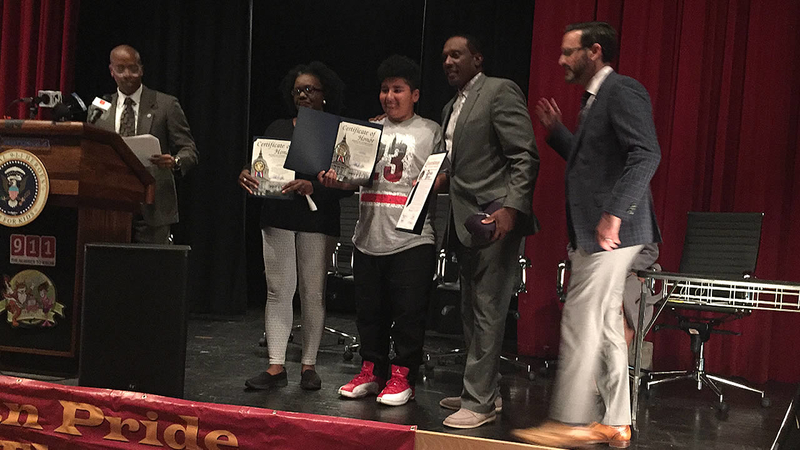 SAN FRANCISCO (KGO) -- A 12-year-old boy was honored by his school and by the city of San Francisco for calling 911 and saving his uncle's life.

On Wednesday, Adrian Perez met the dispatcher who helped him along the way. "I want you to put one hand on his forehead and the other under his chin and tilt his head back," she said during the 911 call.

Perez and the dispatcher sat together just before they were both honored for saving his uncle's life. "Him, being so young and calm it kind of tripped me out a little because talking to young people, they're not calm sometimes," Corie Portlock said.

His 34-year-old uncle suffers from diabetes and his blood sugar level had dropped dramatically. "His sugar was at 19 and I gave him some food and it went to 70, and went back down when I called," Perez said.

Perez heard the March 6, 2017 911 recording of him being guided over the phone by the dispatcher before he was honored.

"And she was on the line with me until the fire department came in," Perez said.

It was a proud moment for his grandmother, Merced Perez. "He just figured out what he had to do," she said.

For the school, it was a chance to teach other students now to handle an emergency. That message was delivered by former Oakland Raider wide receiver Tim Brown. "The more information our children can give a dispatcher, can make all the difference in the world, Alright? So, you guys remember that. Know when to call, don't call when the cat is in the tree," he said.

Perez said he now wants to be doctor.