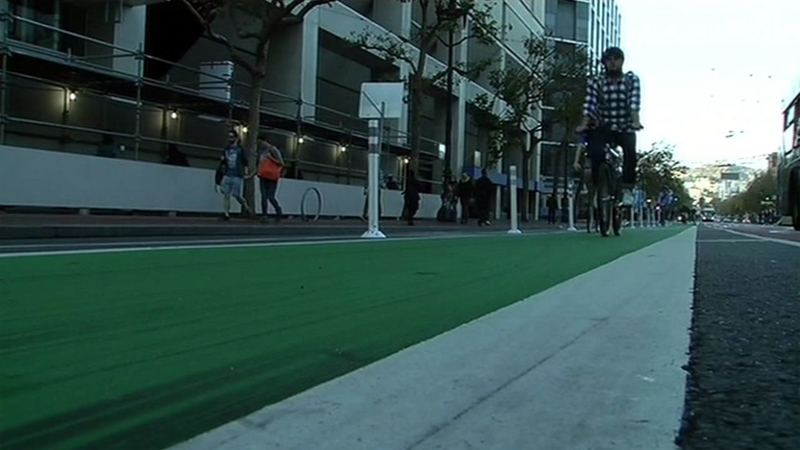 SAN FRANCISCO (KGO) -- Big changes are coming to the bike lanes on Market Street in San Francisco to make the lanes safer for bicyclists. Construction crews will raise the lanes a few inches off the ground, starting Monday on eastbound Market Street between Gough and 12th Street.

Bicyclists say it's already a bit tense navigating their way on Market Street alongside cars. Some have trouble imagining how they would do it in a lane raised up a little higher than the cars.

"I think more people will probably bike off the curb, so I am not sure that's very safe," San Francisco resident Robert Harvey said.

Construction on a new raised lane started Tuesday. The idea is based on similar lanes in Amsterdam.

But with any new idea comes questions about how it will work.

"I feel like maybe people could fall off of that. I don't know. Is there going to be like something vertical?" asked San Francisco resident Siena Aguaio.

There won't be vertical barriers, but plastic pillars will be there and lanes will still be green.

Transportation officials aren't worried about people falling off of the raised lane "At this point, we think this is going to be a beneficial and positive thing for people riding bikes, people who are walking and people who are driving as well because it organizes the streets. What we're seeing here is just how high is comfortable and how low makes a difference," Muni spokesperson Paul Rose said.

One driver already feels like the two lanes are already plenty separated. "I think it's not necessary. Why? I don't know," driver Michelle Hsu said.

Transportation officials say since the number of people on bikes has grown 200 percent since 2006, they think something new is necessary.

"We are just trying something new to improve safety, improve comfortability and just to try new things because we have to be innovative about ways we improve our transportation network," Rose said.

Bicyclists and drivers are asked to be even more aware of each other now more so than usual because of the construction.