San Francisco mayor working to get homeless off streets 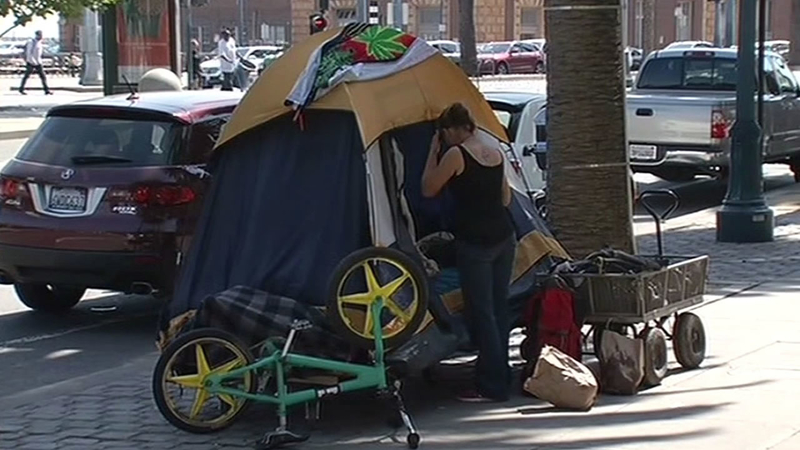 San Francisco mayor working to get homeless off streets

SAN FRANCISCO (KGO) -- San Francisco Mayor Ed Lee is celebrating the first of five hotels renovated for the city's homeless, but admits with such a large population it's going to take time to get the majority off the streets.

Directly across the street from San Francisco City Hall, there are always homeless people. The mayor has been trying to get them off the street before the predicted El Nino winter and before the upcoming Superbowl festivities and he's trying to do it one hotel at a time.

Norine Barnes is off the streets and into her own place at the Baldwin. It was a single room occupancy hotel for the down and out.

It has been renovated and is the first of five hotels Lee has promised will supply more than 500 units of permanent supportive housing for the homeless by the end of the year. "Maybe people on the streets there's like 3,500 today, 500 makes a dent. It's a serious dent, but I need more than that," Lee said.

The mayor said he wants the homeless camped close to the upcoming Superbowl festivities to leave. "The Superbowl offers us a fantastic opportunity to repeat what we're doing today. Let's get more people off the streets for the right reasons," Lee said.

But where will they go? Raynardo Hamilton is one of the lucky ones to move into the Baldwin with case managers and counselors. "Being in this building, it's helping me be a better person," he said.

The city plans to spend $14.5 million to lease the five hotels. The Baldwin's owners said they could make more money with private tenants, but have decided to work with the mayor. "I think the city has just reached out to us in a different manner. The mayor is meeting with our group quarterly, which is a great sign," Dipak Patel said.