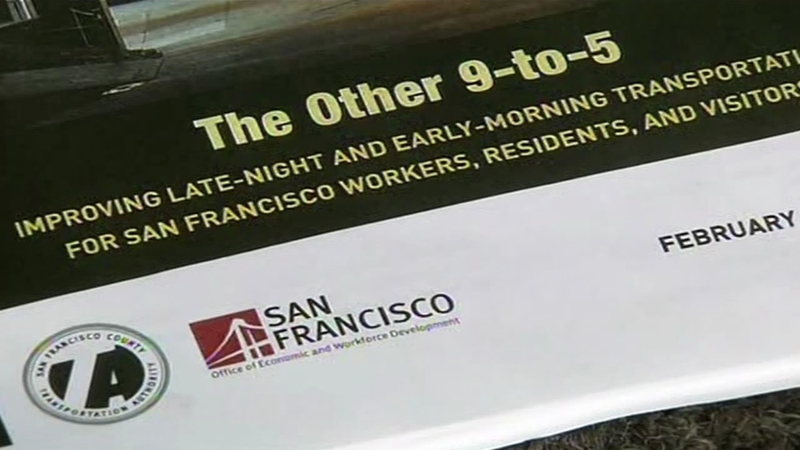 SAN FRANCISCO (KGO) -- San Francisco has a thriving night life economy, but it could be even better if it was easier and safer to get in and out of the city late at night. And not just for those who want to visit the city's bars and restaurants, but for those who work there as well. A new plan was released on Monday that's designed to do just that.

"Despite the fact that late night is such a critical part of our culture and economy, it seems sometimes like our transportation system doesn't really match up," he said.

The supervisor organized a working group that has unveiled a report called "The Other 9-to-5." It finds the late night industry contributes $4.2 billion a year to the economy, employs more than 50,000 people, and generates about $50 million in tax revenues.

But lack of reliable transportation after dark, whether it's waiting for a bus or difficulty catching a cab, is hurting the bottom line for local businesses and taking a toll on workers.

"People refer to late night employees and workers at bars, restaurants, and other businesses as human ATMs because they are left alone on the street late at night without security," said Tom Temprano with Virgil's Sea Room.

And then there's BART. Lack of 24-hour service was the number one issue in the report's survey. A BART board director wants to know what can be done to speed that along.

"There are good reasons why it's difficult," said Nick Josefowitz with the BART Board of Directors. "But difficult is very different from impossible and that's why we need to push really hard."