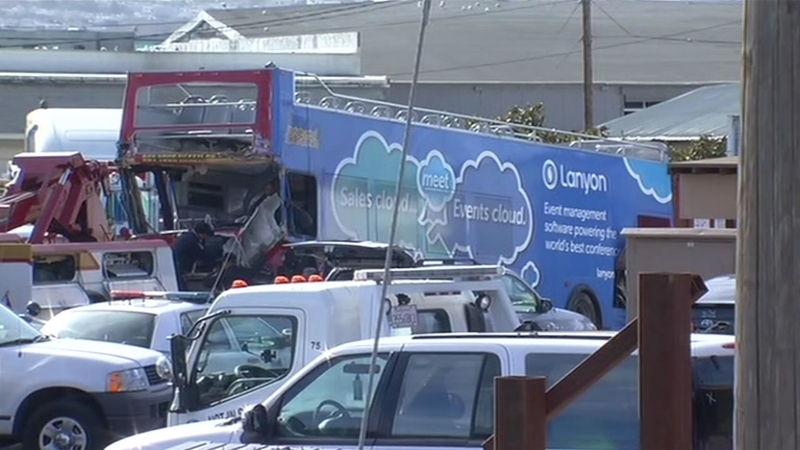 The California Public Utilities Commission says City Sightseeing could be facing up to $20,000 in citations. If CPUC investigators find violations above the $20,000 threshold, the commission may open a formal investigation that doesn't limit the fines.

Investigators are taking pictures and examining the twisted tour bus with dozens of exposed wires.

CHP says it never inspected the City Sightseeing double decker bus before because the tour bus company never told the state Public Utilities Commission about it. Something CPUC says the bus company was required to do.

Last Friday, the bus driver crashed into a bicyclist, other cars, another City Sightseeing tour bus and scaffolding. The bus driver's wife told ABC7 News he told her, the brakes failed.

But City Sightseeing maintenance workers say the bus checked out.

Company CEO Christian Watts says City Sightseeing inspects its vehicles every 45 days or less. He says they inspected the bus that crashed October 25, also that it's registered with that DMV. The state says that's not enough.

CPUC investigators are also looking at Bus 223, the other City Sightseeing bus the runaway bus crashed into.

A bus driver vehicle inspection report in the windshield lists body damage and dents to the top deck.

Maintenance worker Jose Sanchez is thinking about his friends.

And like investigators trying to figure out how this crash occurred.