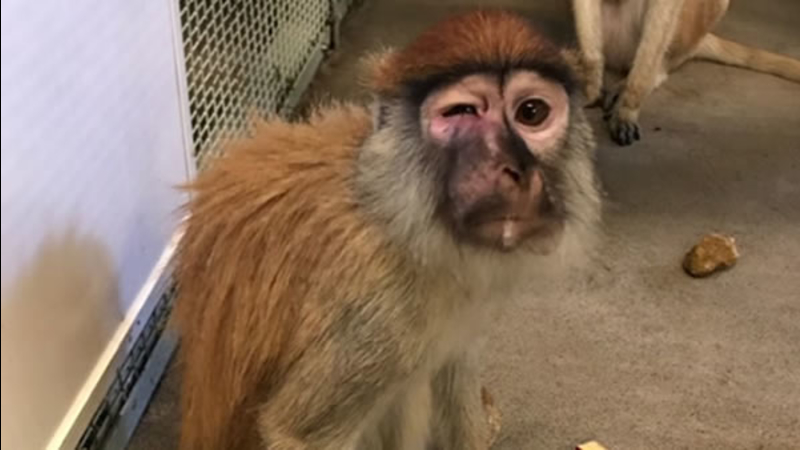 SAN FRANCISCO (KGO) -- A zookeeper is at odds with zoo management over a recent animal euthanasia decision at the San Francisco Zoo. Last month, the zoo euthanized a sick baby monkey but his caregiver says it didn't happen soon enough.

The animal keeper, Dayna Sherwood, loves her job and all the animals she cares for at the zoo. But she's worried publicity concerns factored into the end of life decision instead of just the health and well-being of the animal.

She also disagrees with zoo management about when the monkey's euthanasia was scheduled.

"He was breathing through his mouth because his nose was pushed to the other side of his face." Sherwood describes the rare cancerous tumor that suddenly appeared on a young patas monkey's face, shocking San Francisco Zoo staff.

"Just watching him eat, he was having trouble with that. Liquids would roll out of his mouth," she said.

According to zoo health records, JP's face started swelling on March 18 and by the first week of April, his vision was obscured and he was having trouble breathing, though he was still active and social with the other monkeys.

"He was definitely uncomfortable," Sherwood said. She's been working at the San Francisco Zoo for 10 years and takes care of the patas monkeys five days a week. "It's a special job, I do feel lucky to have it," she said.

But Sherwood's upset because she says that JP was scheduled to be euthanized on April 7 and the procedure was delayed.

"I think if anybody saw the rate that his tumor grew, they'd be shocked that we would keep him for another week going," she said.

Starting at the end of March, photos show the progression of the tumor through April 12.

JP was euthanized the next day, on April 13, after VP of Wellness and Animal Behavior Jason Watters sent a letter detailing JP's decline to his boss, the zoo's executive director Tanya Peterson.

A post-mortem x-ray appears to show the tumor displacing some of JP's teeth and jaw.

Watters denies there was a euthanasia scheduled for April 7, saying there was only a conversation.

The zoo provided ABC7 News with an email a vet sent to Peterson on April 8, saying euthanasia is likely to be necessary when the tumor starts to affect JP's quality of life. But Sherwood shared text messages she says she received on April 6 from a supervisor, saying he sat down with Jason (Watters) and that it - meaning euthanasia - would likely be tomorrow.

Then on the morning of April 7, she says that supervisor texted her again saying, "It will likely be this afternoon." She was prepared for it to happen at 4 p.m. but at 3:55 p.m., Sherwood got a text saying, "on hold for the moment."

"That's when I was told by the vet who came by that we weren't doing it. What I heard was that Tanya Peterson said she didn't want the media to catch wind of it and think that we euthanize too many animals and euthanize our animals too soon. So she wanted to hold off," Sherwood said. When asked who she heard that from, Sherwood said, "From the vet."

When asked if he feels any pressure from his managers above to not euthanize animals for any other reason besides health or quality of life, Watters responded, "No, no." Watters says that when he makes a recommendation to Peterson about euthanizing an animal, she generally agrees with his decision.

Watters says he is concerned about the disconnect between animal keepers and zoo management over JP. "I was surprised, to be honest with you. I thought that we had fallen on a course that was agreed upon," he said.

The Association of Zoos and Aquariums says that their accreditation standards require the head of the zoo to have the final say over euthanasia, in consultation with other employees at the facility.

A zoo employee did call the USDA, concerned about JP's condition, and a USDA inspector visited the zoo on April 12 and reported "no non-compliant" issues at the time.

Peterson did put out a statement which ABC7 News received on April 22. Read it below:

"Euthanasia decisions are never taken lightly. SF Zoo humanely euthanized the juvenile patas monkey when he began to show signs of decline in quality of life. There was no delay. The protocol and process is based on review by the Zoo's team of medical and behavioral advisors.

Decisions of euthanasia are probably the most difficult decisions made at any zoo, including ours, and that is why my staff and I created a process to attempt to capture the input of our various animal care experts as well as develop objective quality of life metrics. Not surprisingly, opinions have differed, but the metrics guide us in these decisions. Animal welfare is our top priority and we strive to provide outstanding care."