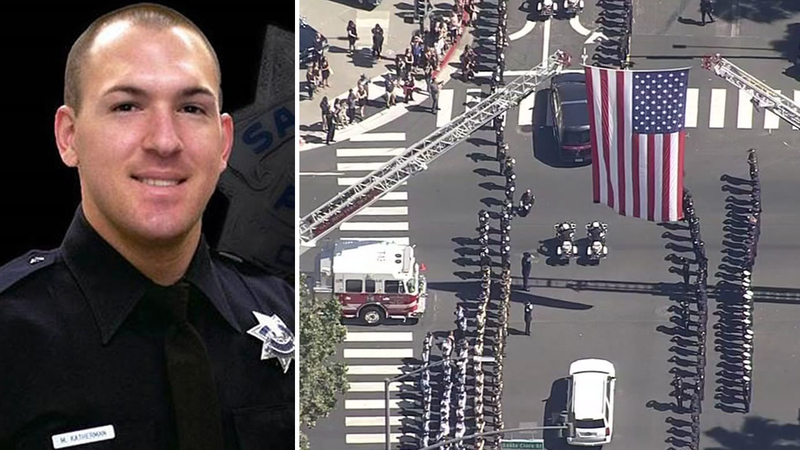 SAN JOSE, Calif. (KGO) -- A touching memorial service was held Tuesday for San Jose Police Officer Michael Katherman, who died in a motorcycle accident in the line of duty last week. Bay Area law enforcement officers lined the streets in San Jose, saluting as the hearse passed by on its way to SAP Center for the memorial.

The service for the 34-year-old was full of tears and laughter. San Jose's police chief called Katherman an exceptional officer, but first and foremost, a husband and father devoted to his family.

On the outside it was a solemn procession, starting from a funeral home in Los Gatos and winding its way to SAP Center in downtown San Jose.


Officers from law enforcement agencies across the region, the state, and the nation converged to mourn the loss of a highly regarded officer.

A flag was draped between two San Jose fire ladders at the entrance.


But inside, the somber mood changed as family, friends and colleagues remembered Michael Katherman, whom members of his academy class dubbed "The Kat Man."

"Mike, at a five foot eight to five foot nine, could actually dunk," said SJPD Chief Eddie Garcia. "Mike could do great impersonations. I understand that he could do a great Chris Farley and a great Kermit Frog. But I hear that his best was of a retired sergeant."

The officer's father, Tom Katherman, spoke on behalf of the family, praising his son as a devout Christian who cared for others. And others liked him back.

It was difficult for loved ones and even strangers to hold back tears as they heard how Katherman was a devoted husband, father of two sons, and dedicated police officer, who devoted some of his time to a society to support the families of other officers killed in the line of duty.

The tears flowed even more as a family friend read letters from the officer's sons -- Josh and Jason - in which they expressed how much they miss him, but will remember the fun times, like dirt biking and camping.

“What a wonderful gesture.” Dad of fallen #SJPD cop thanks #Warriors for #NBAFinals tickets. https://t.co/5VJsRkfPwDhttps://t.co/qHghKEF9wv