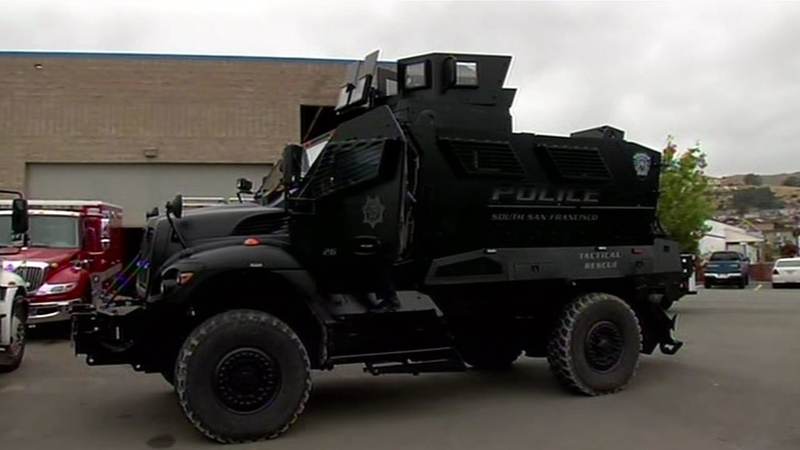 SAN LEANDRO, Calif. (KGO) -- President Barack Obama wants to limit military-style equipment used by police departments across the nation. This comes in response to the riots in Ferguson, Missouri. Here in the Bay Area, several departments are justifying their use of military equipment.

After much debate, the city of San Leandro ordered a medevac bearcat to help rescue injured officers or civilians. It'll be in place early next year thanks to a grant from the U.S. Department of Homeland Security.

But on Monday, Obama said officers should take on the role of guardians, not warriors.

The president is mandating that some equipment be prohibited and others restricted like wheeled armored vehicles, pyrotechnics, battering rams, and riot gear.

"We've seen how militarized gear can sometimes give people the feeling like there is an occupying force as opposed to a force that's part of the community that's protecting them and serving them," Obama said.

Obama wants to restrict some military style equipment used by police- says they should be guardians, not warriors. pic.twitter.com/V6Mdon5QAd

On Jan. 1, police in South San Francisco used their armored personnel carrier to search for a suspect who had fired earlier at officers. Police justify the department's use of military-style equipment.

"It's all about safety," said Lt. Scott Campbell. "Would you rather see a vehicle like this driving down the street or would you rather be on the news dealing with an officer or citizen who's been critically wounded?"

Since Sept. 11, police departments have beefed up their military-style equipment through a grant program offered by Homeland Security. But cities like San Jose and Berkeley have said no to any armored vehicles.

When asked what his opinion was of the vehicle, Kayalar said, "Oh this is for military enemies and the war zone."