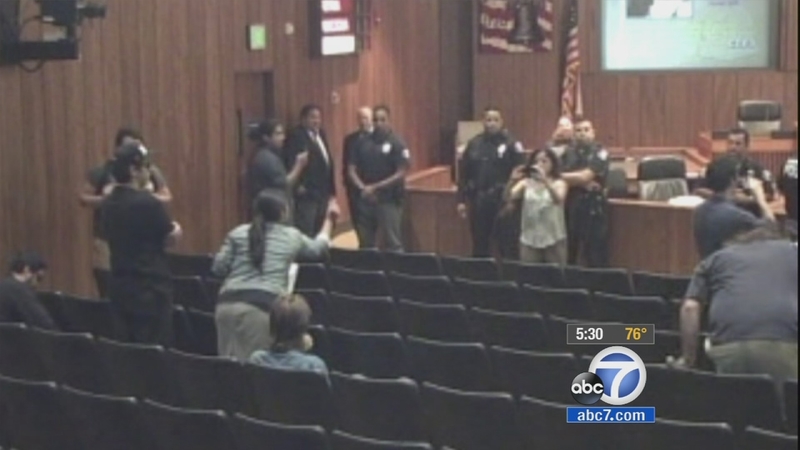 SANTA ANA, Calif. -- A Santa Ana City Council meeting was abruptly canceled Tuesday night after a dispute over a hat with an obscenity set off a shouting match. The council chambers were cleared and a knife left behind was found.

Mayor Miguel Pulido says he canceled the meeting because a man wearing a hat with a derogatory message toward the police on it refused to take it off or leave.

"You don't get to come into a council chambers, nor a court room for that matter. I ask you to go to any court in America and see if a judge would allow this in their courtroom, and they won't," said Pulido.

Pulido says the man and a group with him became unruly and were yelling curse words. When police finally cleared the room, officials say they found a large knife.

"You don't know what people's intentions are, and I hope that we don't have to do the screening the way they do in many other areas, but maybe we do," said Pulido.

The council was set to discuss crowd decorum after another incident at its last meeting.

Several of the activist groups supporting the man in the hat told Eyewitness News that this is the result of rising tensions spurred by the Edgar Vargas case.

Surveillance video shows Vargas getting hit by Santa Ana police officers after he allegedly ran from them on a burglary call in June.

On his way to a court hearing, immigration agents took him into custody. An FBI spokesman confirms they're investigating if his civil rights were violated.

Since then, all charges except for an attempted-burglary charge have been dropped, and he's been released on bail. Vargas's mother, Olivia Arzate, was at Tuesday night's meeting, and she says enough is enough.

"We're fed up with being treated that way. We Hispanics come to work, we don't look for any problems," Arzate said. "We are not to stay silent when we see injustice, we have rights."

Mayor Pulido says Tuesday night's agenda will be continued in two weeks. The groups Eyewitness News spoke to Wednesday say they plan to be there again.