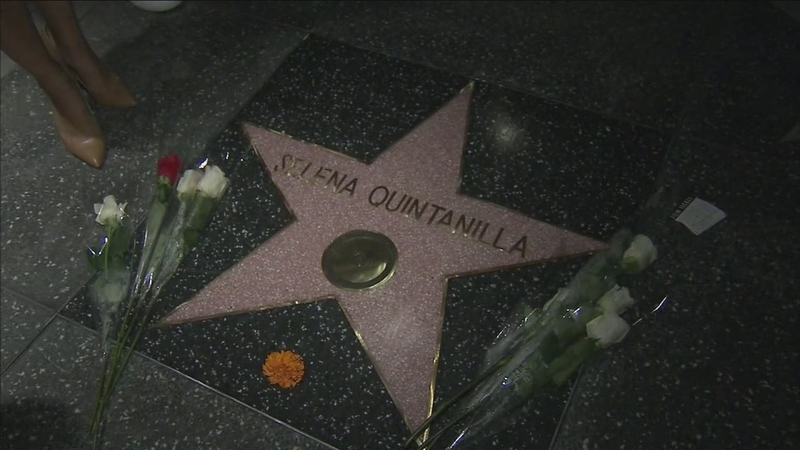 HOLLYWOOD, LOS ANGELES -- It's been 22 years since Selena Quintanilla sang her last song, but super fans from across California made sure her legacy lives on during the unveiling ceremony for her Hollywood Walk of Fame star Friday.

The singer got her star on the walk in a day the city dubbed "Selena Day." At least 4,500 people were in attendance for the unveiling.

"Since her make-up line came up and her sister and her family are really trying to promote her more, they were finally able to get a star for her," fan Nidia Robles, of Reseda, said. "It's all over social media so it's hard not to hear about it."

Down the street from Capital Records and the star were Selena lookalikes who lined up for blocks to catch a glimpse of the ceremony.

"She means everything to me. She is one of the biggest role models of my life," said Sienna Gomez, of North Hills.

The Queen of Tejano was just 23 when she was murdered. A life cut short more than two decades ago by the president of her own fan club.

Fans, like 4-year-old Sammi Lampa, stood in line for hours just to get a glimpse of the ceremony. Lampa even wore her favorite Selena outfit.

"It's pretty and sparkly just like Selena, and she is the best singer of all," she said.

One man drove all the way from Bakersfield with his heart on his pant leg. In a hole on the leg was a tattooed portrait of his favorite singer.

"I am Mexican, but I did not grow up speaking Spanish. You know, that's her story. She grew up not speaking Spanish either and I think that a lot of second generation people have that same connection with her," Cesar Gonzalez said.

It's a star for a woman still touching millions of people even decades after her death. Those people include actress and producer Eva Longoria, who paid her respects to a Latina who came before her.

"I'm not going to cry. Like Eric said this star is not only for Selena, it's for every Latina out there who has ever had a dream," she said.

Longoria, along with Mayor Eric Garcetti and Selena's family members, announced it would officially be "Selena Day."

We’ve been dreaming of this day for a while. The one and only Reina de la música Tex-Mex, Selena, has a star on the Hollywood Walk of Fame! pic.twitter.com/cq6UouOVeZ

Her sister, Suzette Quintanilla, said the family wanted to create a legacy for the late singer.

"Selena said the goal isn't to live forever but to create something that will. And I think tonight is a perfect testament of that," she said.