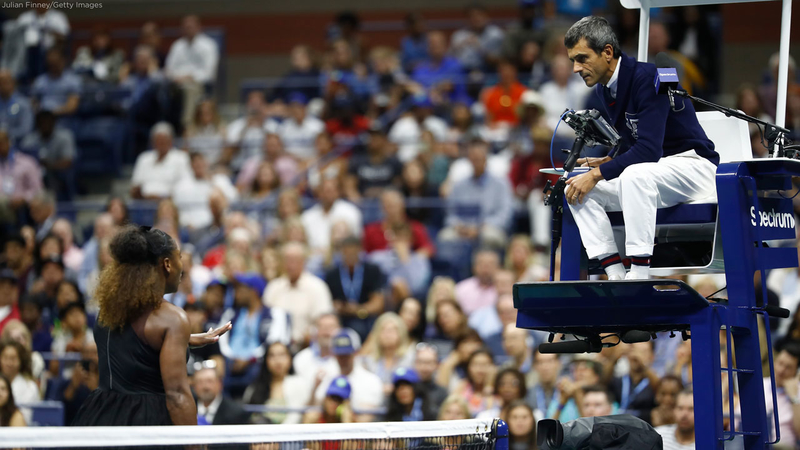 'I don't cheat to win': Serena Williams spars with umpire over penalty

NEW YORK -- Serena Williams has been fined a total of $17,000 for three code violations during the U.S. Open final, one of which resulted in a heated confrontation where Williams told the chair umpire that she'd "rather lose" than cheat.

The tournament referee's office docked Williams $10,000 for "verbal abuse" of chair umpire Carlos Ramos, $4,000 for being warned for coaching, and $3,000 for breaking her racket. The money will be donated to the Grand Slam Development Fund to "develop competitive tennis opportunities worldwide," according to the International Tennis Federation.

"You owe me an apology!"

Serena was fired up with the official in the final set of the US Open final. pic.twitter.com/r6RSbrirnV

Williams clashed with chair umpire Ramos, demanding an apology after he initially issued a warning for a code violation in the second set's second game for receiving coaching, which is not allowed during Grand Slam matches.

Williams objected right away, saying she would never cheat. After the match ended, in an interview with ESPN, Williams' coach, Patrick Mouratoglou, acknowledged he had tried to signal Williams, but said he didn't think she had seen him - and added that he thinks every player gets coaching during matches.

Briefly, Williams appeared to be working her way back into the match, breaking Osaka for the only time to go up 3-1 in the second set. But Williams played a poor game right after that to get broken immediately, and she smashed her racket on the court, destroying it. That drew a second code violation - and, automatically, cost Williams a point. When she realized that the next game had started with Osaka ahead 15-love, Williams told Ramos he should have retracted the initial warning for coaching.

—Serena to the chair umpire after receiving a coaching violation pic.twitter.com/v6Q2GWYYOn

"I have never cheated in my life!" Williams said. "You owe me an apology."

She resumed arguing with Ramos later, saying, "You stole a point from me. You're a thief, too."

He responded by issuing a third code violation, which results in a lost game. That made it 5-3 for Osaka.

Ramos called both players over to explain his ruling, and Williams began laughing, saying: "Are you kidding me?" Then she asked to speak to tournament referee Brian Earley, who walked onto the court along with a Grand Slam supervisor. Williams told them the whole episode "is not fair," and said: "This has happened to me too many times."

"To lose a game for saying that is not fair," Williams said. "There's a lot of men out here that have said a lot of things and because they are men that doesn't happen."