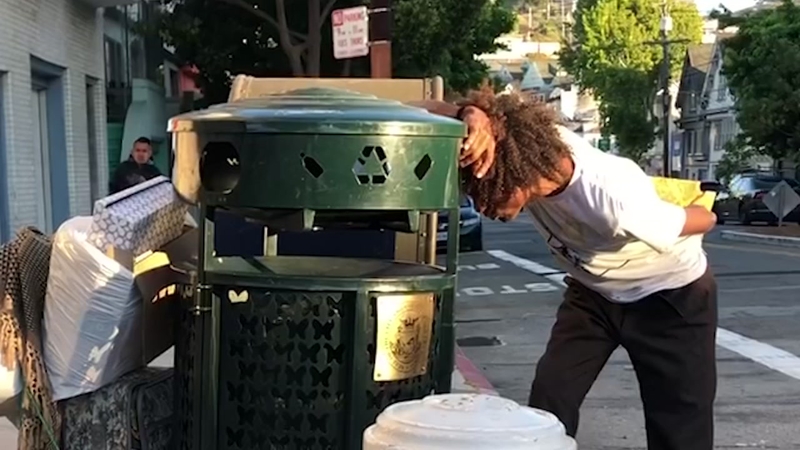 SAN FRANCISCO (KGO) -- ABC7 News is teaming up with other media outlets for the San Francisco Homeless Project in a joint effort that aims to hold leaders accountable for the city's homeless problem.

The city is home to a quarter of the Bay Area's homeless population. Many of the people suffer from mental illness and drug addiction. Their afflictions can keep them from getting the help or treatment they need. Now the state is considering a plan that lets cities take custody of those people so that counties can make decisions for them.

It is a scene repeated around the city -- a homeless man wandering the streets talking to himself, digging through trash cans.

"I have witnessed during the past few years in this job, and throughout my career, individuals that we are just unable to help," said Jeff Kositsky, Director of the San Francisco Department of Homelessness & Supportive Housing.

Kositsky is among a growing number of people who work with the homeless think it may be time to force people to get help.

He says, on any given night, there are 7,500 people living on the streets of San Francisco. Some of them end up in the emergency room.

"They get stabilized, and are able to talk about how they are going to take care of themselves, but then they are going to go back in again the next week, and we just go through the cycle. And legally we can't hold them," said Kositsky.

He wants to use a legal process called conservatorship to get those with the most severe issues off the streets.

Conservatorships would allow judges to appoint guardians for people with physical or mental limitations.

There's a bill in Sacramento now that would let counties become conservators for homeless people. Conservators could then force them to get medical care, even if they refuse services.

"We have a real crisis on our streets with people who are homeless and literally dying because of untreated severe illness, severe drug addiction," said San Francisco State Senator Scott Weiner, author of legislation that would change the law.

"For many, many people offering services is sufficient you can help them, but for a small percentage of chronic homeless, they are not in their right mind to even make a decision," said Weiner.

Weiner's bill would give the cities of San Francisco and Los Angeles more flexibility in how they use conservatorships, expanding the practice to include chronically homeless persons with serious mental illness and substance use disorders. The bill is now in the assembly, and expected to pass.

"As with a lot of complicated issues, the devil's in the details," said Hadar Aviram, a constitutional law professor at U-C Hastings in San Francisco.

"This is a rather extreme denial of civil rights, and this is why conservatorships are generally reserved to very, very extreme cases and require a very high level of proof that the person cannot take care of themselves."

Aviram says conservatorships could be a very effective tool to help the homeless who really need it, but she cautions they could infringe on a person's rights.

"The concern is that the program is going to expand and that people are going to be swept in that do not deserve to have their civil rights taken away from them. This is not something that should be done lightly, this is something that we should be very, very concerned about," said Aviram.

According to Senator Weiner, the law has been written with safeguards to prevent it from being used too broadly. He estimates 50 to 100 homeless people in San Francisco could be getting the help they need if conservatorships were used right now.