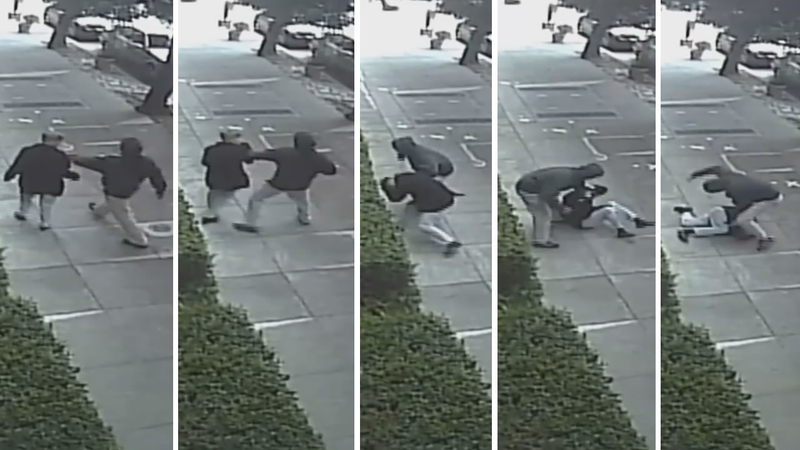 SAN FRANCISCO (KGO) -- A walk in the park took a terrifying turn when a woman was suddenly attacked. A warning -- the full video may be disturbing to some. The attack took place while it was still light outside and it wasn't preceded by any sort of argument.

The woman was walking near San Francisco's Lafayette Park in Pacific Heights on Saturday evening when police say a man walked up to her from behind and started punching her for no reason.

The victim will survive, but her recovery will take some time.

Police say the brutal attack was unprovoked and happened on Washington across the street from the park.

According to Officer Carlos Manfredi, the victim was taking a walk around 7:45 p.m. when the suspect approached her. Surveillance video that captured the attack shows the man approach the victim and start punching her repeatedly, continuing to beat her even after she fell to the ground.

San Francisco police are looking for a person who they say walked up to a woman for no reason and started punching her.

The man eventually ran away. The victim told police she'd never seen him before.

"She had not encountered him before that, she was merely on a walk in that area and saw him run up in the corner of her eye. He said some words and then just started attacking her," Officer Giselle Talkoff.

And fellow neighbor Janet Lustgarten adds, "I'm very surprised. So we're going to have to have a gathering and be able to pay for some guard."

Manfredi says the victim's nose was broken in several places and she sustained cuts on her nose and face.

The suspect is described as a white male, possibly homeless, 40 to 50 years old with brown hair, and an average build. He was wearing a dark green zip-up sweater/shirt and jeans at the time of the attack.